Ironton makes the most of its hits to beat Hornets 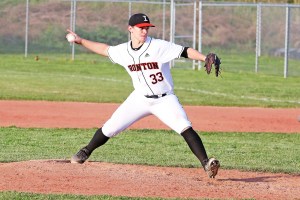 Ironton’s Ben Taylor (33) picked up a win in his first varsity pitching start as the Fighting Tigers beat the Coal Grove Hornets 14-4 on Wednesday. (Photo By Tim Gearhart)

The Ironton Fighting Tigers made the most out of what they got.
Ironton had just 6 hits but utilize those hits with 6 Coal Grove errors and 3 hit batsmen to cruise to a 14-4 Ohio Valley Conference run rule win over the Hornets on Wednesday.
“We had a lot of opportunities given to us and we were able to take advantage of them. We had only six hits but we had a lot of clutch hits,” said Ironton coach Travis Wylie.
“I though Ben Taylor threw a nice game. That was his first varsity start and he had good command of his pitches.”
Taylor gave up 4 earned runs, 7hits, struck out 3 and walked just one in going the distance.
Cameron Deere led Ironton at the plate as he went 2-for-3 with 2 doubles and 2 runs batted in. Jon Wylie was 2-2 with 2 RBI.
Xander Keaton topped the Hornets by going 3-3 with 2 RBI.
Coal Grove (0-4, 0-2) remained winless but coach Blair Demetroules said his team gave a good performance.
“We’re young, we’re getting better. This was our best offensive effort of the season,” said Demetroules.
Ironton wasted no time in taking charge with 4 runs in the first and 8 through the first 3 innings.
In the first, Kyle Howell drew a one-out walk and scored on Deere’s double. Ryan Ashley reached on an error as Deere scored. Nate Bias was safe on an outfield error and Cole Freeman reached on an error to score Ashley. Wylie then lined a single to center driving in Bias.
The lead went to 5-0 in the second on a walk to Trevor Kleinman and Deere’s second RBI double.
Coal Grove got 2 runs in the top of the third with one out.
Keaton and Connor Harrison singled, Tait Matney had an RBI double and Josh Vanover’s ground out scored Harrison.
Ironton (4-3, 1-1) answered with 3 runs in the bottom of the inning.
With one out, Freeman was hit by a pitch, Wyle walked, Freeman moved up on a passed ball and scored on a wild pitch with Wylie going to second. Wylie stole third and scored on a sacrifice fly by Ashton Duncan.
Howell and Kleinman reached on errors and Howell scored on a double steal.
The Hornets got 2 runs back in the fourth.
Hunter Staton singled, S Shope put down a sacrifice, Jake Stephens walked and Keaton singled for a run and the second run scored on the return throw from the outfield.
The Fighting Tigers came right back with 4 runs in the bottom of the inning to lead 10-4.
Jacob Sloan walked and Ashley tripled him home. Freeman was hit by a pitch and Wyline singled for a run. Duncan walked to load the bases and Peyton Aldridge hit into a force play scoring a run. A throwing error on the play scored Wylie.
Ironton created the run rule win with 2 runs in the bottom of the fifth.
Connor Kleinman and Chayden Kearns walked and Rocky White was hit by a pitch to load the bases. Jayden Charles walked forcing in a run and Freeman had an infield hit as a run scored.
On Friday, the Hornets host Chesapeake and Ironton visits Gallipolis.
Coal Grove 002 20 = 4 7 6
Ironton 413 42 = 14 6 1
Landon Davis, Tait Matney (3), Davis (4), Matney (4), Jake Stephens (5) and Jake Stephens, Matney (5). Ben Taylor and Cole Freeman. W-Taylor (ER-4, K-3, BB-1). L-Davis (IP-3.0, H-5, R-12, ER-6, K-1, BB-5, HBP-2). Matney (IP1.0). Stephens (IP-0.0, H-1, R-2, ER-2, BB-3, HBP-1). Hitting-CG: Xander Keaton 3-3 2-RBI, Connor Harrison 1-3, Tait Matney 1-3 2B RBI, Landon Davis 1-3, Hunter Staton 1-2, Josh Vanover RBI; Ironton: Cameron Deere 2-3 2-2B 2-RBI, Ryan Ashley 1-3 3B RBI, Cole Freeman 1-2 RBI, Jon Wylie 2-2 2-RBI, Ashton Duncan RBI.