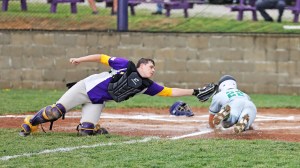 St. Joseph Flyers’ catcher Michael Mahlmeister reaches to try and tag out Green Bobcats’ baserunner Nathaniel Brannigan (22) who slides across the plate safely to score. The Flyers won 11-1 in an SOC game . (Photo By Tim Gearhart)

After a little slipping and sliding, Jackson Rowe was dealing and gliding.
Rowe shook off a shaky first inning to pitch a 4-hitter as the St. Joseph Flyers got an 11-1 win over the Green Bobcats in a 5-inning Southern Ohio Conference game on Thursday.
“Jackson threw 25 pitches in the first inning and then 49 the rest of the game. He wasn’t very comfortable the first inning trying to adjust to the mound with the rain we had earlier. After that, he settled in and threw pretty well,” said Flyers’ coach Greg Bryant.
Rowe threw just 74 pitches of which 54 were strikes to get the win. He struck out 10, walked 2 and the only run was unearned. He allowed just 2 hits after the first inning and retired 10 of the final 14 batters.
Rowe also went 2-for-3 at the plate. His brother Elijah Rowe was 2-3 with a double and 2 runs batted in, Matt Sheridan was 1-2 with a double, Brady Medinger 1-2 and Jacob Salisbury 1-1 with a double and 2 RBI.
Levi Singleton, Nathaniel Brannigan, Dustin Sprouse and Brandon Neal all had hits for the Bobcats.
Green (1-5, 1-1) got its run in the top of the first inning
Singleton reached on an error to start the game, Brannigan singled and a fielder’s choice put runners at second and third. Rowe struck out the next batter but Sprouse had a 2-out RBI single.
The Flyers (4-1, 2-0) tied the game in the bottom of the inning with an unearned run as Rowe, Blake Stuntebeck and J.C. Damron all reached on consecutive errors.
St. Joseph took the lead for good with a run in the second on a single by Medinger and Jimmy Mahlmeister’s line drive double to center.
The lead went to 4-1 in the third inning.
Sheridan and Rowe walked. Sheridan stole third and came home on a sacrifice fly by Stuntebeck. Rowe scored on a balk.
The score remained the same in the fourth before the Flyers ended the contest with 7 runs in the fifth inning.
Sheridan started the inning with a double and went to third on Rowe’s infield hit. Stuntebeck walked to load the bases and Damron reached on an error as a run scored.
Michael Mahlmeister hit into a fielder’s choice to drive in a run and Elijah Rowe doubled home 2 runs. Mark Hodges walked and Jacob Salisbury doubled to score pinch-runner Matt Heighton and Elijah Rowe.
Jimmy Mahlmeister it a sacrifice fly to center to score pinch-runner Drew Brown and make it 10-1. Sheridan walked and Jackson Rowe singled home pinch-runner Darryn Harvey to create the run rule win.
The Flyers visit Sciotoville East on Tuesday.
Green 100 00 = 1 4 7
St. Joseph 112 07 = 11 8 1
Dustin Sprouse, Austin Ray (5) and Wiley Sanders. Jackson Rowe and Michael Mahlmeister. W-Rowe (ER-0, K-10, BB-2). L-Sprouse (IP-4.1, H-7, R-11, ER-7, K-1, BB-4). Ray (IP-0.1, H-1, BB-1). Hitting-Green: Levi Singleton 1-2, Nathaniel Brannigan 1-3, Dustin Sprouse 1-2 RBI, Brandon Neal 1-2; St. Joseph: Jimmy Mahlmeister 1-3 2B 2-RBI, Matt Sheridan 1-2 2B, Jackson Rowe 2-3 RBI, Blake Stuntebeck RBI, J.C. Damron RBI, Elijah Rowe 2-3 2B 2-RBI, Brady Medinger 1-2, Jacob Salisbury 1-1 2B 2-RBI. SF-St. Joseph: Jimmy Mahlmeister, Blake Stuntebeck.