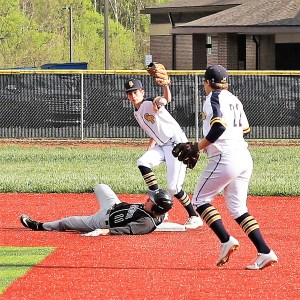 Coal Grove Hornets’ Tait Matney (11) slides safely into second base ahead of the potential tag by South Point Pointers’ shortstop Blaine Freeman during Monday’s game. Matney pitched a one-hitter as the Hornets won 13-1 in six innings. (Photo by Tim Gearhart)

SOUTH POINT — Diamonds are a girl’s best friend but Tait Matney is the Coal Grove Hornets BFF.
Matney pitched a one-hitter as the Hornets beat the South Point Pointers 13-1 on Monday in a six-inning Ohio Valley Conference game.
Matney got the first out in the sixth and then shortstop Landon Davis made a diving catch to keep the no-hitter in tack. But with an 0-2 count, Jordan Ermalovich singled for the Pointers to spoil the no-hit bid.
“Tait Matney pitched a gem. He battled some stiffness in his ribs but he fought through it from the second inning on. It was something special,” said Hornets’ coach Blair Demetroules.
“It was a good win. It felt nice to get a win. We had timely hits and a lot aggression on the bases.”
Coal Grove (1-5, 1-3) bounced back from a 6-3 loss in 8 innings to Chesapeake on Friday with some clutch hits.
The game was scoreless until Coal Grove erupted for 9 runs in the third inning.
Hunter Staton was hit by a pitch and Landon Johnson singled to put runners on the corners. Dreyden Osborne grounded out as Staton scored, Jake Stephens walked, Xander Keaton reached on catcher’s interference and Connor Harrison got an infield hit to load the bases.
Matney was safe on a fielder’s choice to load the bases as Stephens scored, Josh Vanover walked to force home a run, Schyler Shope singled in 2 runs, Davis singled in a run and Staton grounded out as a run scored.
South Point (1-8, 0-4) got its runs in the fifth when Gage Chapman reached on a dropped third strike, stole second and came home when Xavier Haney grounded out.
The Hornets then created the run rule with 4 runs in the sixth.
Osborne and Keaton doubled, Harrison was hit by a pitch, Matney reached on an error as a run scored, Shope was hit by a pitch to force in a run and Staton delivered a 2-run single.
South Point visits Greenfield McClain on Tuesday and Rock Hill on Wednesday. Coal Grove entertains Gallipolis on Wednesday.
Coal Grove 009 004 = 13 7 0
South Point 000 010 = 1 1 2
Tait Matney and Jake Stephens. Hunter McCallister and Gage Chapman. W-Matney (ER-1, K-11, BB-0). L-McCallister (ER-9, K-5, BB-6, HBP-3). Hitting-CG: Xander Keaton 1-3 2B, Connor Harrison 1-3, Schyler Shope 1-3 3-RBI, Landon Davis 1-3 RBI, Hunter Staton 1-3 4-RBI, Landon Johnson 1-2, Dreyden Osborne 1-3 RBI 2B; SP-Jordan Ermalovich 1-3.