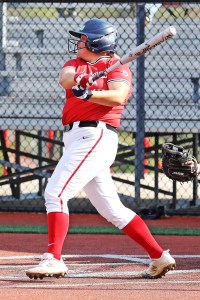 Rock Hill Redwomen’s Kylee Howard connects for one of her two home runs in an 11-3 win over the Chesapeake Lady Panthers on Monday. (Photo by Tim Gearhart)

PEDRO — Power up!
Kylee Howard slugged a pair of home runs and Makenzie Hanshaw also went deep as the Rock Hill Redwomen beat the Chesapeake Lady Panthers 11-3 in an Ohio Valley Conference game on Monday.
Howard went 3-for-4 with 3 runs batted in. Tabby Miller was 2-4 while both Emmi Stevens and Kaylee Gillespie were 2-3 with a triple and an RBI.
Chesapeake took a 1-0 lead in the top of the first inning when Maddie Ward walked, moved up on a ground out, took third when Madison French was safe on an error and scored on Sidney Fuller’s ground out.
Rock Hill tied the game in the bottom of the inning on a one-out solo home run by Howard.
The Redwomen went up 2-1 in the second on a single by Miller, Nevaeh Hackworth’s sacrifice and Steven’s RBI triple.
The Lady Panthers regained the lead with 2 runs in the third.
Jaylen Adkins, Ward and Errika Bowman all singled for a run. Adkins stole third and scored on the throw.
Rock Hill tied the game in the bottom of the inning on a 2-out solo home run by Hanshaw.
The Redwomen took the lead for good with 5 runs in the fourth inning.
Miller singled and went to second on an outfield error. Hackworth singled home Miller, Stevens and Gillespie singled to load the bases and a passed ball scored Hackworth.
Howard then capped the uprising with her second blast as she belted a 3-run homer.
Rock Hill scored 3 more runs in the sixth inning.
Gillespie got a one-out triple and scored on Aleigha Matney singled. Howard singled, Hanshaw walked and Adkins reached on an error for a run. The final run scored on the return throw to the infield.
Howard also got the win with a 4-hitter as she struck out 4 and walked one.
Chesapeake 102 000 0 = 3 4 2
Rock Hill 111 503 x = 11 12 1
Errika Bowman and Rachael Bishop. Kylee Howard and Mckenzie Hanshaw. W-Howard (ER-3, K-4, BB-1). L-Bowman (ER-10, K-4, BB-2). Hitting-Chesy: Maddie Ward 1-2, Errika Bowman 2-3 RBI, Jaylen Adkins 1-3; RH: Aleigha Matney 1-4 RBI, Kylee Howard 3-4 2-HR 3-RBI, Makenzie Hanshaw 1-3 HR RBI, Tori Adkins RBI, Tabbi Miller 2-4, Nevaeh Hackworth 1-2 RBI, Emmi Stevens 2-3 RBI 3B, Kaylee Gillespie 2-3 RBI 3B.