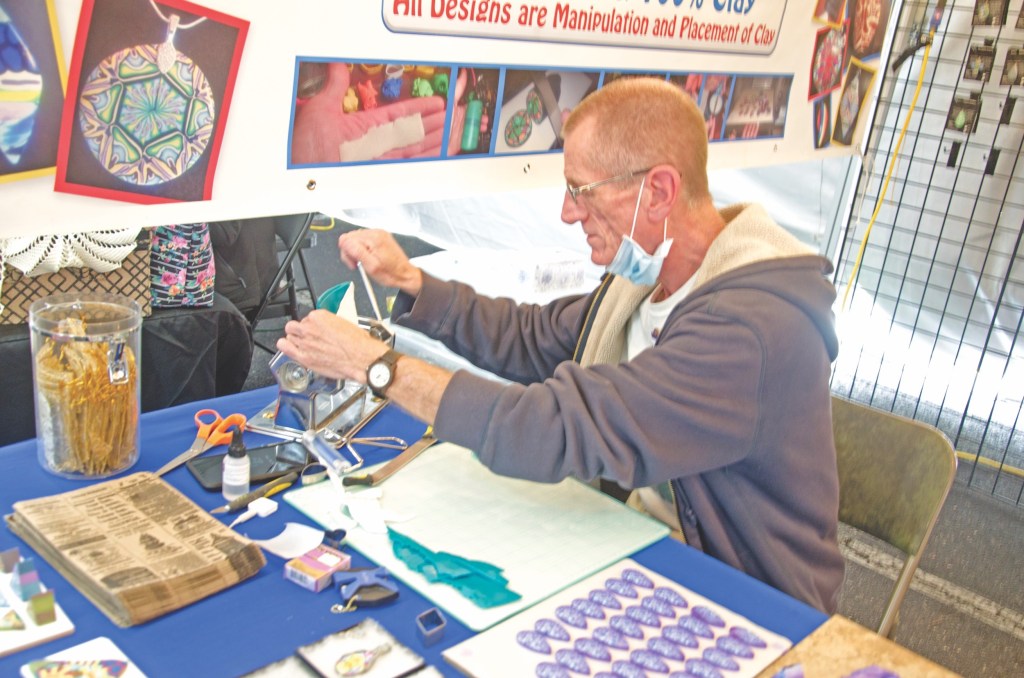 SOUTH POINT — Each November, the Lawrence County Chamber of Commerce hosts its annual Festival of Trees and Christmas market at their headquarters on Collins Avenue in South Point.

However, due to the COVID-19 pandemic and the high number of cases at the time late last year, they were forced to make the festival virtual and cancel the Christmas market, which offers space to local vendors and artisans.

At the time of the cancellation, Chamber director Shirley Dyer said they planned to host a spring Arts & Craft Festival in order to give the vendors who had prepared a chance to sell their wares.

On Saturday and Sunday, that plan came to pass, with 16 vendors setting up in a tent on the lot.

Those participating included vendors such as Paparazzi Jewelry, of South Point and Ky Country Road Dips, of Ashland Kentucky, run by David and Kay Higgins.

David said they were selling gourmet dips, for vegetables, hamburgers and potatoes, which were mixed in Cleveland.

Near the entrance was Bethany Himes, a teacher at the nearby Tri-State STEM+M Early College High School.

She had a variety of goods available at her bake sale, with all proceeds from sale going to support the school’s choir and drama programs.

Himes said the drama department was preparing for a musical production of Freaky Friday, which be performed at 7:30 p.m. Friday and Saturday, May 7-8 at the bandstand in Ashland’s Central Park.

The shows will be free and open to the public.

“It will be a great show,” Himes said.

Most vendors had pre-made items for sale, which was the case for Ken Epperly, of Huntington, but he also was working on new creations at his booth.

Epperly starts with a log of polymer clay, which he compresses designs and patterns into, eventually building what is known as a cane, which is used to make the items.

He said, in addition to what he had on sale at the fair, he has large pieces currently on display at Tamarack Marketplace, an artisan showcase in Beckley, West Virginia, just off the West Virginia Turnpike.

One of those, a unicorn, he said took weeks to create.

“I love doing shows,” Epperly said, stating it allows him time to create and for people to see his process.

He said the Chamber event was only his second since COVID-19 hit and forced him to stop for a year. He previously did one in Huntington a few weeks ago.

The Chamber hopes for a full return of the Festival of Trees and Christmas Market later this year.