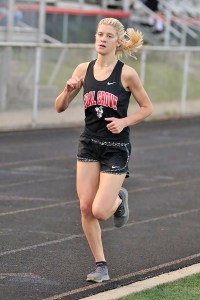 Coal Grove Lady Hornets’ Elli Holmes ran a 5:41 time in the 1600 meters two weeks ago to set a new school record and breaking the old mark set by her sister Torri Holmes. (Photo By Tim Gearhart)

COAL GROVE — The KOVCCT meet belongs to the CGLHTT.
The Coal Grove Lady Hornets track team won the KOVCCT track championship on Tuesday at Portsmouth High School.
The Lady Hornets used a total team effort to rack up 158.5 points and finished ahead of runner-up Ashland at 100 points.
“Many girls contributed to the win. We’ve had some really good times this spring and set a few records in the process,” said Lady Hornets’ coach Aaron Hankins.
The Fairland Lady Dragons were third with 78 points followed by Gallipolis with 74, Boyd County 64, Chesapeake Lady Panthers 60.5, South Point Lady Pointers 43, Raceland 24 and Russell 24 each, Portsmouth Lady Trojans 23 and Greenup County 13.
The highlight of the meet for the Lady Hornets was the 4×400 meter relay team comprised of Kylie Montgomery, Olivia Kingery, Laura Hamm and Kylee Thomas which set a new school record of 4:14, breaking a record that has stood since 1979.
Montgomery also won the gold in the 400 meters as she placed first and Hamm was third.
Kylee Thomas enjoyed a huge day as she raced to a first place finish in the 100-meter hurdles and the 300 hurdles while taking second in the 200 meters.
Elli Holmes had a big day as she was second in the 3200, fourth in the 1600 and teamed with Abbey Hicks, Addi Dillow and Hamm to finish second in the 4×800 relay.
Two weeks ago, Holmes set a new school record in the 1600 with a time of 5:41, thus eclipsing the old mark set by her sister Torri Holmes.
Hicks finished fourth in the 3200.
Hamm raced to a third place in the 800 meters, Maddie McDaniel was third in the 100 meters and the 300 hurdles and seventh in the 200 meters. Kelsey Fraley was fifth in the 100 meter hurdles.
The 4×200 relay quartet of McDaniel, Montgomery, Dillow and Kingrey took first place.
The 4×100 relay team of Kelsey Fraley, Dillow, Hicks and Kingrey placed fifth.
In field events, Amber Schwartz took first place in the discus and Rylee Harmon was sixth. Harmon racked up a second place finish in the shot put.
Kingery added a sixth place in the long jump, Matti Hapney was second in the pole vault and Tyera Pemberton was sixth.
In the high jump, Dillow took second place and Kayleigh Rowe was sixth.
Russell had 128 points and Portsmouth 127 in the boys’ meet. Boyd County finished with 73 points, Ashland 65, Raceland 64.5, Greenup County 61.5, Gallipolis 59.5, Chesapeake 55 and South Point 27.5.