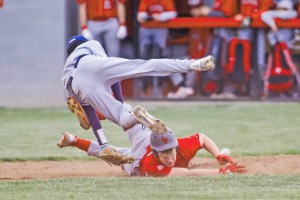 Symmes Valley’s Brayden Webb gets into second base safely as the Portsmouth Notre Dame Titans’ infielder goes flying into the air as the ball falls to the ground. The Vikings won 5-1. (Photo By Josh Wilson)

AID — Devin Renfroe wasn’t giving up any hits and his outfield was making sure of it.
The Symmes Valley senior right-hander gave up only one hit and his outfield of Ethan Patterson, Logan Justice and Levi Best caught anything that was hit their way as the Vikings beat the Portsmouth Notre Dame Titans 5-1 in a Southern Ohio Conference game on Thursday.
Renfroe struck out four, walked three and threw just 75 pitches over 6.1 innings. Caden Brammer came on to get a double play ball to end the game.
“We played well. Devin threw well and he threw a lot of strikes,” said Vikings’ coach Chad Renfroe. “Their kid threw well. We just played good defense. Our outfield covers a ton of ground and our infield played well.”
Notre Dame scored its run in the top of the first inning.
Dylan Seison safe on an error to start the game, moved up on a sacrifice bunt, went to third on a wild pitch and scored on Seth Nichols’ ground out.
The Vikings (11-1, 6-1) came back to take the lead with two runs in the third.
Levi Best singled, stole second, Brammer singled and stole second and both scored on a hit by Brayden Webb.
Webb went 4-for-4 with four runs batted in.
The lead went to 4-1 in the fourth inning.
Brammer doubled, Levi Niece walked and Webb doubled for his second 2-run hit.
The Vikings final run scored in the fifth when Nick Strow doubled, Logan Justice singled and Best reached on an error for
Best finished 2-4, Strow 1-2 with a double and Justice 1-3. The Vikings left 11 runners on base.
“We didn’t hit it great and we left a ton of runners on bases, but we did enough to get the job done,” said coach Renfroe.
Notre Dame’s lone hit was a one-out single by Chris Schmidt in the seventh inning.
Symmes Valley hosts Sciotoville East on Friday.
Notre Dame 100 000 0 = 1 1 3
Sym. Valley 002 210 x = 5 10 1
Alex Cassidy and Ethan Kammer. Devin Renfro, Caden Brammer (7) and Nick Strow. W-Renfroe (IP-6.1 H-1, ER-1, K-4, BB-3), Brammer (IP-0.2, R-0, H-0, K-0, BB-0). L-Cassidy (ER-4, K-7, BB-3, HBP-2). Hitting: Chris Schmidt 1-2: SV: Levi Best 2-4, Brammer 2-4 2B, Webb 4-4 2B, Strow 1-2 2B, Justice 1-3.