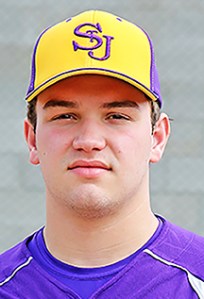 PORTSMOUTH — Jackson Rowe was doing his Ringo Starr impersonation. He was the main singer in a key Southern Ohio Conference game, but he got by with a little help from his friends.
Rowe pitched a brilliant one-hitter as the St. Joseph Flyers blanked the Portsmouth Notre Dame Titans 2-0 on Friday in a game sparked by clutch hits and defensive plays.
Rowe had a no-hitter with two outs in the seventh inning when Reagan Lester hit line drive single to center.
Rowe struck out four and did not issue a walk in going the distance. He threw 62 strikes among his 86 pitches.
“Jackson threw a heck of a game He’s thrown extremely well all year. He throws strikes and mixes his pitches well,” said Flyers’ coach Greg Bryant.
“Defensively we made a couple of errors, but we played good defense when we had to and we had some timely hits.”
The game was scoreless until the third when the Flyers scored their first run.
Brady Medinger singled, stole second and third and scored on a ground out by Matt Sheridan.
St. Joseph (10-1, 6-0) added an insurance run in the top of the sixth.
With one out, Sheridan singled, stole second and scored on a single by Rowe.
In the bottom of the sixth, Bryant said a key defensive play may have proved crucial in the outcome of the game. Rightfielder Brady Medinger ran and made a diving catch on a liner by Ethan Kammer leading off the inning.
“Brady Medinger made the play of the game. He could have stayed back and let the ball fall, but he was aggressive and made a diving catch to save a double or maybe a triple if the ball gets by him,” said Bryant.
“It made a huge difference. They could have had a guy on second or third to start the inning and who knows what happens. He’s done a good job for us,”.”
Rowe also went 2-3 as the Flyers had just four hits off Titans’ pitcher Caleb Nichols who struck out seven and walked one in going the distance.
The Flyers visit Portsmouth Clay on Monday in another big SOC game.
St. Joseph 001 001 0 = 2 4 5
Notre Dame 000 000 0 = 0 1 2
Jackson Rowe and Michael Mahlmeister. Caleb Nichols and Ethan Kammer. W-Rowe K-4, BB-0, HBP-1). L-Nichols (ER-2, K-7, BB-1). Hitting-SJ: Matt Sheridan 1-3 RBI, Jackson Rowe 2-3 RBI, Brady Medinger 1-3; PND: Reagan Lester 1-4.