Thomas signs to golf for Marshall 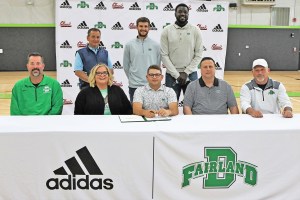 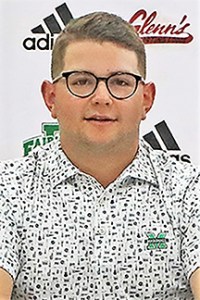 PROCTORVILLE — Former NFL coaching great George Allen had a saying, “The future is now.”
Fairland Dragons’ senior golfer Clayton Thomas has probably never heard of Allen, but he definitely understands the idea to focus on the now instead of the future after signing a letter-of-intent on Wednesday to play golf for the Marshall Thundering Herd.
An All-Ohio point guard and excellent 3-point shooter, Thomas said he never even thought about playing golf at young age
Thomas began playing basketball as young as 2 years old, he didn’t pick up a golf club until the eighth grade when Jimmy Roberts got him to play.
“In my first middle school match, I think I shot 55 from 150 yards out. I was using my mom’s clubs,” said Thomas who got his first set as a freshman and then recently got a new set.
“As a freshman, I had an old set of graphite shaft Ping irons and as I got better by the end of my sophomore year I started breaking them just by hitting them out there. I’ve been through two iron sets.
“I played basketball since I was 2 years old. Thinking about it five years ago, I would never have dreamed this. I would play golf maybe once a year with my mom on Mother’s Day because she would like to go out there and play. Right now, I’m going to focus on golf. I’ve never done that before.”
Thomas was the medalist the past three seasons in the Ohio Valley Conference tournament and the sectional tournament. He was the district medalist as a sophomore and runner-up the past two seasons.
He qualified for the state tournament his sophomore year but not as a junior or senior.
“I went my sophomore year, my worse year. I was a better player the other two years,” said Thomas.
Thomas had discussions with Shawnee State and some schools in the south. He said Marshall coach Matt Grobe got his foot in the door first.
“This (past) summer was the first year I played and could get out there. (Grobe) talked to me early enough and I wanted to go there anyway,” said Thomas.
“I already knew most of the guys over there. I play at Guyan (Country Club) everyday anyway. I can stay around here, I already know the ins and outs of it, so it worked out really well.”
Clayton’s brother Luke was an All-Ohio basketball player for Fairland and is now a member of the Marshall team. He said both of them have their strengths.
“He got pretty good coming out of high school. If we end up shooting, he knows who will win. If we play one-on-one, he wins. He can’t beat me in H-O-R-S-E,” said Thomas.
For now, Thomas plans to make basketball an afterthought and focus on golf.
“I’m going to focus on it and see where it can take me. I don’t know. Nobody knows. The great thing about it is every year I’ve played, I’ve gotten better. Now I’m starting to learn more from the people I’m playing with. Before I was just out there hitting around. If I was hitting bad starting a round, I was done. I couldn’t fix it,” said Thomas.
“I’m learning more and more about it, especially around the greens. The greens are all about eye-hand coordination. That’s my opinion.”
Just in the past few months, Thomas said his game has improved with the help of Guyan Country Club golf pro Rick Ellison.
“My short game is where I get my shots. I’m not long off the tee. My irons aren’t very good. From 100 yards and in, that’s where I score,” said Thomas.
“Before, I was always self-taught. I had this big cut and I was coming over the top of the ball so bad. I started with Rick Ellison on Monday two and a half weeks ago and I learned how to re-hit an iron and everything. I’m starting to hit the ball better now,” said Thomas whose best drive now is in the vicinity of 280 yards.
Thomas plans to major in accounting.
“I started trading in the stock market in March of last year. Me my brother and my dad. I trade every day,” said Thomas.