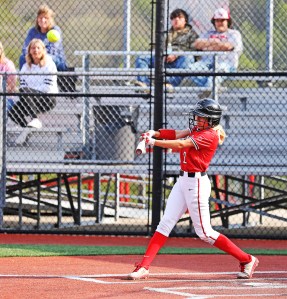 PROCTORVILLE — The Rock Hill Redwomen offense appeared to be sleeping in. But when the bats woke up, boy, did they wake up.
Silent for the first half of the game, the Redwomen came to life and beat the Fairland Lady Dragons 7-3 in an Ohio Valley Conference game on Friday.
The game was scoreless until the fourth inning when Rock Hill put a 5-spot on the board.
Makenzie Hanshaw walked to start the inning and Tori Adkins reached on an error. Abby Morrison singled to load the bases and Tabbi Miller singled for an RBI.
Nevaeh Hackworth doubled home a run, Emmi Stevens got a bunt singled for an RBI and Karlee Gillispie squeezed a run home.
Fairland got a run back in the bottom of the inning when Brenna Reedy reached second on an error, took third when Kaylee Salyers was safe on an error and scored on a wild pitch.
The Lady Dragons cut the deficit to 4-3 with two runs in the fifth.
Katie Bell singled, Katie Pruitt was safe on an error but Zoey Roberts hit into a force out at third. Emily Bowen singled to Pruitt and Roberts went to third on the throw home. Reedy grounded out as Roberts scored.
The Redwomen got a run back in the sixth when Hackworth reached second on an error, Stevens put down a sacrifice with Hackworth scoring on the play.
Rock Hill added an insurance run in the seventh.
Hanshaw walked, moved to third on a couple of ground outs and scored on Miller’s base hit.
Rock Hill finished with 8 hits as six different players had hits. Miller and Hackworth were 2-4, Stevens and Gillispie all had doubles. Stevens drove in two runs.
Fairland had six hits with Bowen going 3-4 with an RBI.
Howard got the win as she struck out two and walked just one.
Salyers pitched well for Fairland as she struck out four and walked three over in a complete game effort.
Rock Hill 000 501 1 = 7 9 4
Fairland 000 120 0 = 3 6 4
Kylee Howard and Makenzie Hanshaw. Kaylee Salyers, Halie Clark (7) and McKenna Black. W-Howard (ER-0, K-2, BB-1). L-Salyers (IP-6.0, H-9, R-7, ER-6, K-4, BB-3). Hitting-RH: Kylee Howard 1-4, Abby Morrison 1-4, Tabbi Miller 2-4 2-RBI, Nevaeh Hackworth 2-4 2B RBI, Emmi Stevens 1-2 2-RBI, Karlee Gillispie 1-2 2B; FHS: Emily Bowen 3-4 RBI, Kaylee Salyers 1-2, Chloe Vonville 1-2, Katie Bell 1-1.