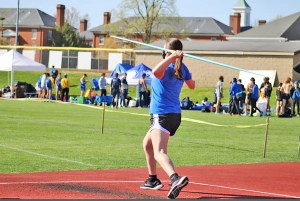 During the spring in high school, Ironton Lady Fighting Tigers’ Riley Schreck was an excellent softball player.
Schreck also played volleyball and basketball. In fact, she signed to play basketball for Alice Lloyd College.
But none of that has anything to do with what Schreck did last week when she was named the Alice Lloyd Female Student/Athlete of the Week in track and field.
Schreck, a freshman, competed in the River States Conference Meet held in Eaton, Ohio. She took first place in the women’s javelin throw as she unleashed a toss of 33.80 meters — 110.89 feet — that was not only a personal record but a school record as well.
Although she took first place, by merely placing in the meet she became the first Alice Lloyd track athlete in school history to place in the RSC meet.
The feat is even more impressive because Schreck has never competed in track and field until this season and this was only the third meet in her life, all held in the month of April.
By winning the event, Schreck qualified for the NCCAA Outdoor Track and Field Nationals to be held May 12-14 in Greenville, IL.