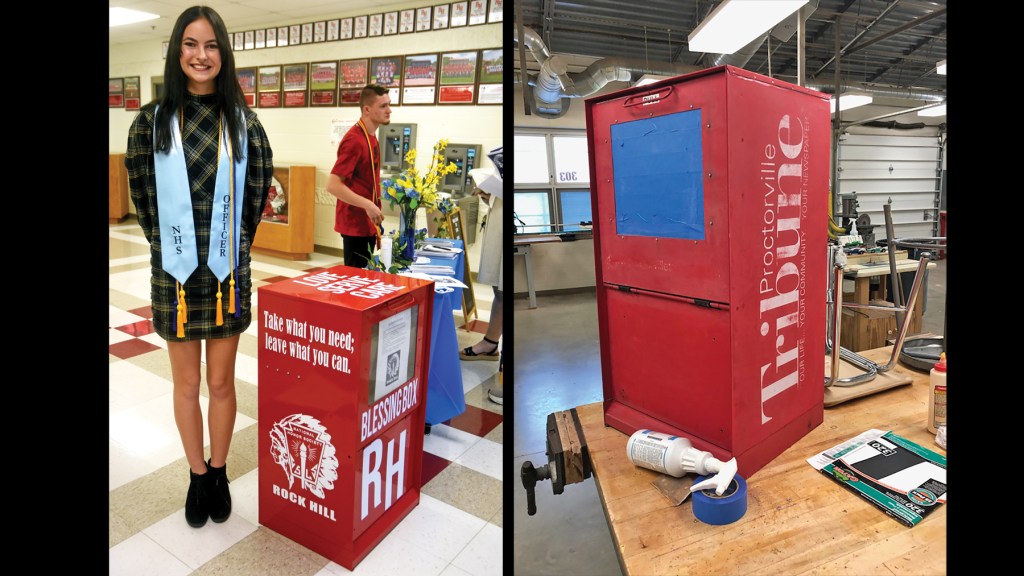 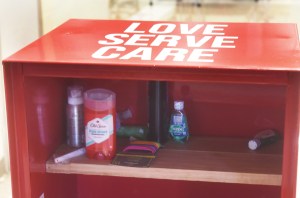 The blessing box, on display at Thursday’s National Honor Society ceremony at Rock Hill High School, was stocked with hygiene items as a sample of what it will be used for in the community. (The Ironton Tribune | Heath Harrison)

Last week, Rock Hill High School inducted new members into its chapter of the National Honor Society and the ceremony focused on how the members exemplified the four pillars of scholarship, leadership, character and service.

And the fourth pillar could be seen in a recent project that was on display by the entrance — one of two new blessing boxes created for the school district.

“She put a lot of thought into this,” he said of the boxes, which will be stocked with things such as hygiene and food items.

Those in need can take what they need from them, while others are encouraged to leave donations.

“That’s the idea for who comes into contact with them,” Gue said. “That’s the legacy they leave here.”

Miller, the daughter of Michael and Marisa Miller, will be attending the United States Air Force Academy, where she will major in mechanical engineering.

She said work on the project began around Christmas this year, when students were coming up with an idea for service project.

In the past, they had done things such as helped to gather PPE for use in the pandemic.

She said they planned for the boxes to be installed in two locations.

“One on the high school campus and one at the board offices at the medical center,” she said.

She said they had originally planned to build the two boxes out of wood, but then contacted The Ironton Tribune, who donated two out-of-use newspaper vending boxes.

“We revamped them and painted them with the school logo,” Miller said.

She said they were ideal for the project, as they were waterproof.

She said she hopes that other school districts in the county will consider doing the same thing.

“We’re hoping to help as many people as possible,” she said.