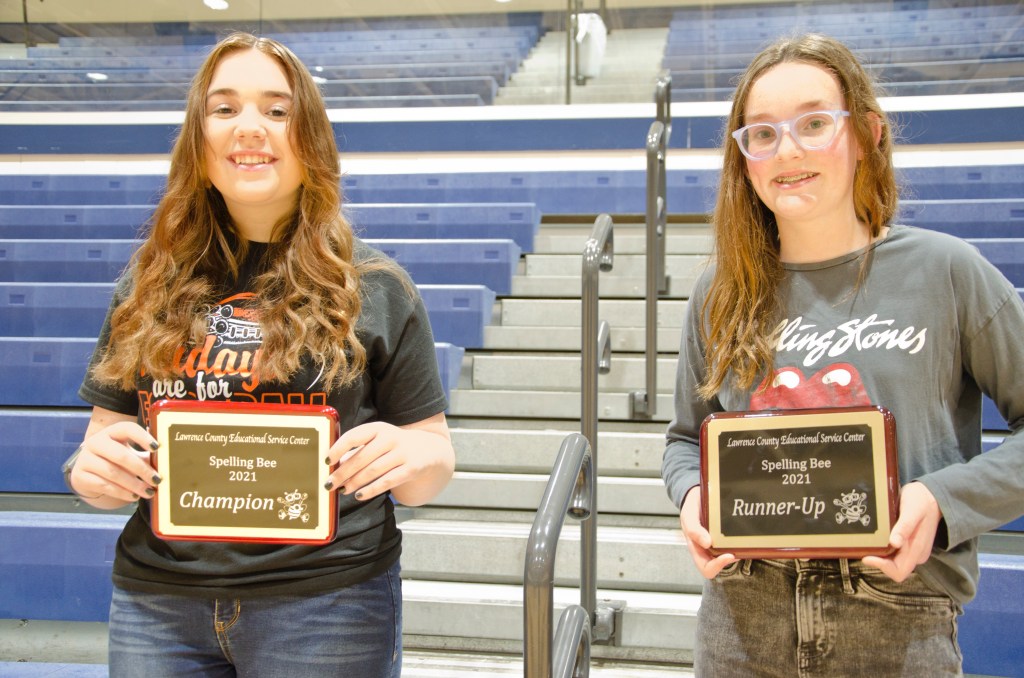 Riley Winters, left, of Ironton Middle School, was the winter of the Lawrence County Spelling Bee on Thursday. Roxy Gue, right, of Fairland West Elementary School, was runner up. (The Tribune | Heath Harrison)

It was four months ago that the Lawrence County Spelling Bee was called off from its usual December date, due to the COVID-19 pandemic.

But on Thursday, the much-anticipated event finally got to happen, though with a change of venue.

In order to accommodate social distancing, the bee was moved from its usual home in the Ironton Municipal Court to South Point High School’s gymnasium.

Jeff Saunders, superintendent for the Lawrence County ESC, which organizes the bee, said that all but two districts were represented in the competition.

Those competing were the winners of their individual school bees earlier in the academic year. The two not present were unable to host a school bee, due to COVID-19, Saunders said.

“This is a day of celebration,” Tomi Blankenship, student services coordinator for the ESC, told the students of their achievement in getting to the event as they prepared to enter the gymnasium.

The competition was open to students from fifth through eighth grades and after several rounds of spelling words read by pronouncer Gary Salyer, the 10 participants were narrowed down to the final two.

After runner-up Roxy Gue of Fairland West Elementary School misspelled her final word, it was time for Riley Winters to spell for the top spot.

In order to win, she had to spell two words correctly, the first of which she pulled off.

Then, in an appropriate twist, the next word on the list to cement her win was “congratulate.”

Winters easily gave the correct answer and was declared this year’s champion.

Winters, a sixth grader, is the daughter of Danielle and Kane Winters.

She said she has taken part in the bee every year since fourth grade and came in third place at the last county bee.

“It feels pretty nice,” she said of her win. “It was a challenge.”

Winters says she hopes to continue competing until her eligibility runs out in eighth grade.

Gue, a fifth grader and the daughter of Sam and Maggie Gue, was competing for the first time.

“It feels good,” she said of her second place finish. “I wish I got the word right, but it’s a learning experience.”

She said she would also be interested in trying again in future years.

Saunders spoke of the challenges educators, including the ESC, faced during the last year of the pandemic.

“It’s been a crazy year that everybody worked through,” he said. “For a while, we didn’t know if we were going to be able to have this.”

But he said faculty at all local schools met the challenge and thanked all of the spellers’ coaches.

“It’s amazing just to watch Lawrence County, see what the schools have done during the pandemic and how they continued to educate our children.”

Saunders also thanked the South Point school district and its superintendent, Mark Christian, for use of their facilities for both the bee and Tuesday’s ESC Quiz Bowl tournament.

“And not just for that,” Saunders said. “But for they have used their board office for county vaccinations. We thank their administration and staff.”

Other students taking part in the bee included:

Following the county bee, a regional bee will take place remotely through Ohio University in Athens.

All school winners were eligible to take an online test to qualify for that event, with Ferguson, a past county bee winner, making the cut and again representing Lawrence County this year.