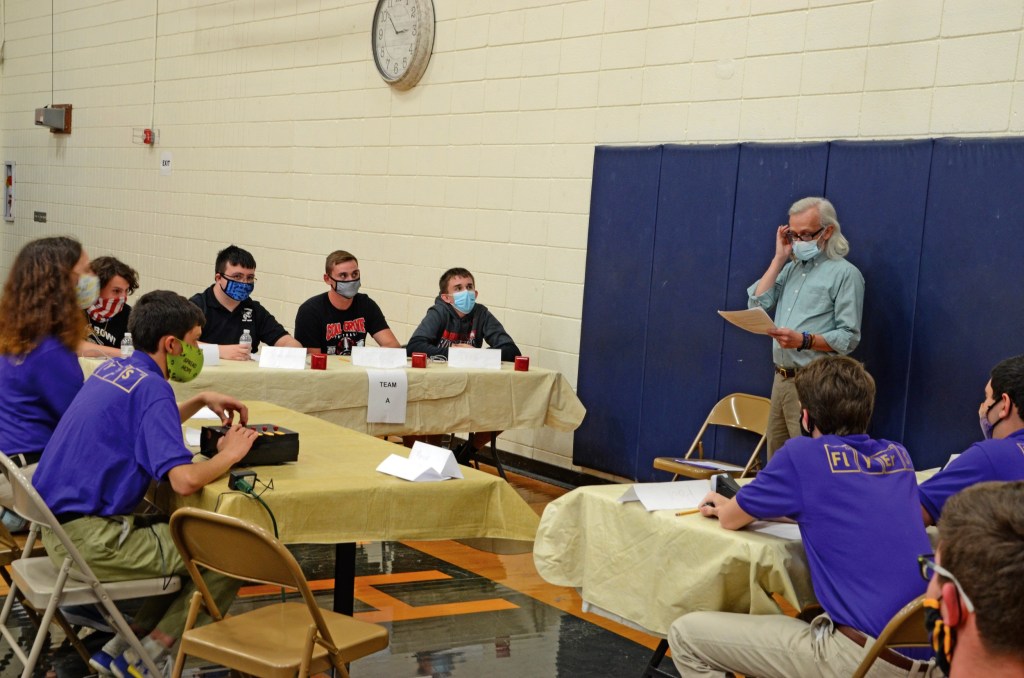 St. Joseph and Dawson-Bryant high schools face off in the final match of the Ironmaster Quiz Bowl tournament on Tuesday. (The Ironton Tribune | Heath Harrison)

SOUTH POINT — In a school year unlike any other, nearly all events have changed or been rescheduled.

And that was the case for the Lawrence County Educational Service Center, who typically hosts countywide events such as the science fair, Quiz Bowl tournaments at the high school and middle school level and the spelling bee.

These events were called off earlier in the year, starting with the spelling bee which is usually set for December, but was when COVID-19 cases were at their highest last year.

After a wait, though, this week saw the return of two of the ESC’s events, starting on Tuesday with the Ironmaster Quiz Bowl tournament, which featured match-ups between eight schools.

Typically taking place in January at Ohio University Southern, when the campus is free and classes are out, this year it was moved to the South Point Board of Education building since OUS was not available.

Teams from the schools faced off against one another, with questions covering history, arts, math, science and many subjects.

The tournament was organized by Tomi Blankenship, who is in her first year as director of student services, taking over from Julie Walters, who moved from the area after several years in the position.

Blankenship thanked all the students and teachers who came out.

“I’ve had a year stuck in my office,” she told Rock Hill students as they were boarding the bus at the end. “This is my first time this year doing something that’s not in the county building.”

The Quiz Bowl tournament was followed up with the Lawrence County Spelling Bee, which took place Thursday at South Point High School.

Blankenship said the ESC hopes to have a Quiz Bowl tournament for middle school teams at a later date.