Flyers get past Vikings in pitcher’s duel 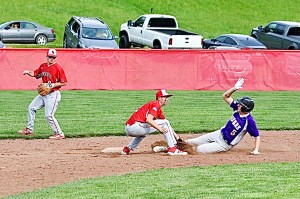 AID — To hit or not to hit, that is the question.
With apologies to Willie Shakespeare, hitting or the lack of it in the clutch proved to be the difference as the St. Joseph Flyers beat the Symmes Valley Vikings 4-1 in a Southern Ohio Conference game on Tuesday.
The Flyers had 10 hits and bunched four hits with a walked and a hit batsman to score all of their runs in the top of the first inning.
The Vikings managed just two hits as they scored their only run in the bottom of the frame and could only manage six hits for the game.
Jackson Rowe went the distance allowing six hits, striking out nine and walking just one.
Vikings’ pitcher Devin Renfroe shook of the slow start and worked 6.1 innings allowing four earned runs with three strikeouts and three walks.
“We couldn’t get anything together. Devin had a bad first inning, but after that he settled in,” said Vikings’ coach Chad Renfroe. “Jackson (Rowe) threw well. He kept us off-balance. They just hit better. We had our chances.”
The Flyers are now 11-4 overall and 7-2 in the SOC. The Vikings lost for only the second time as they fell to 13-2 and 8-2 in the league.
Jimmy Mahlmeister singled to lead off the game, Elijah Rowe walked and Jackson Rowe was hit by a pitch to load the bases.
Blake Stuntebeck hit a sacrifice fly to center scoring Mahlmeister with Elijah Rowe going to third. Michael Mahlmeister singled to score a run and send Jackson Rowe to third base.
J.C. Damron then singled to drive in a run to make it 3-0 and Brady Medinger had a line drive RBI single to cap the rally.
The Vikings came back and in the bottom of the first and scored quickly as Levi Best and Caden Brammer hit back-to-back doubles.
But Jackson Rowe retired the side to end the rally and from that point on the pitchers took charge.
The only other real threat came in the seventh inning when the Flyers loaded the bases on a single by Medinger and walks to Jimmy Mahlmeister and Elijah Rowe.
Brayden Webb came on and retired the next two batters on six pitches to end the threat.
Jimmy Mahlmeister and Damron each went 3-for-3 for the Flyers and Medinger was 2-3 with an RBI. Damron also had an RBI.
Brammer went 2-3 with a double and an RBI for the Vikings while Best was 1-3 with a double, Levi Niece and Webb 1-3 and Renfroe 1-2. Webb also had a double.
The two teams meet on Wednesday at St. Joseph’s Clouston Field.
St. Joseph 400 000 0 = 4 10 2
Sym. Valley 100 000 0 = 1 6 0
Jackson Rowe and Michael Mahlmeister. Devin Renfroe, Brayden Webb (7) and Nick Strow. W-Rowe (ER-1, K-9, BB-1). L-Renfroe (IP-6.1, H-10, R-4, ER-4, K-3, BB-3, HBP-1). Hitting-SJ: Jimmy Mahlmeister 3-3, Blake Stuntebeck 1-3 RBI, Michael Mahlmeister 1-3 RBI, J.C. Damron 3-3 RBI, Brady Medinger 2-3 RBI; SV: Levi Best 1-3 2B, Caden Brammer 2-3 2B RBI, Levi Niece 1-3, Brayden Webb 1-3 2B, Devin Renfro 1-2.