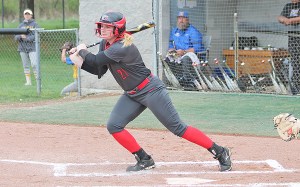 Rio Grande RedStorm outfielder Taylor Webb connects for one of her 14 hits last week as she earned the River Stats Conference Player of the Week honors for the third time this season. (Photo Courtesy The River States Conference)

MIDDLETOWN, Ohio — The Commodores singing group had a hit record in 1978 with a chorus “You’re once, twice, three times a lady.”
The Rio Grande RedStorm may have to do their own version of the song for junior right-fielder Taylor Webb with the words, “You’re once, twice, three times the Player of the Week.”
The former Symmes Valley Lady Vikings’ All-Ohio standout earned her third River States Conference softball Player of the Week honors this season as she was honored for the period of April 26-May 2.
Webb hit a sizzling .560 as she went 14-for-25 with nine of her hits going for extra bases. She had six doubles and three home runs while scoring eight runs and driving in 14.
In a doubleheader sweep of rival Shawnee State, Webb was 5-for-7 with two doubles, two home runs and five RBI.
She had four hits including a home run and three RBI in a sweep of Carlow.
In the final series of the week, Webb had five hits including four doubles with six RBIs in a pair of wins over Point Park.