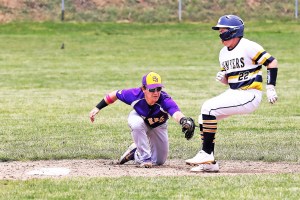 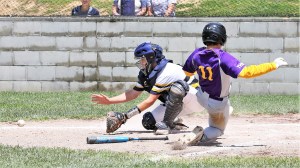 Jimmy Mahlmeister wasn’t the star of the show. However, he was the emcee.
Mahlmeister pitched a three-hitter and went 3-for-3 as the St. Joseph Flyers blanked the South Point Pointers 12-0 on Saturday.
Mahlmeister was one of five St. Joseph seniors including J.C. Damron, Max Weber, Jackson Rowe and Jacob Salisbury who were honored prior to the game and they all contributed to the win.
“I think the seniors were a combined 8-of-11 and they all made contributions,” said Flyers’ coach Greg Bryant. “This is a good group of seniors. They play hard, they’re good leaders and the love to compete and win.”
Mahlmeister struck out four and walked two over the five innings.
The Flyers had 12 hits as Elijah Rowe went 2-2 with an RBI, Jackson Rowe 2-3 with two RBI, Damron 2-2 with a double and two RBI, Weber 1-3 and Matt Sheridan 1-2.
The Pointers (4-20) got a double from Brendan Dillon and singles from Blaine Freeman and Xathan Haney.
The Flyers (12-5) wasted little time as they scored five runs in the first inning.
Jimmy Mahlmeister singled, Elijah Rowe singled and the runners moved up on a ground out. Blake Stuntebeck was hit by a pitch to load the bases and Michael Mahlmeister walked to force in a run.
Damron doubled to left for two runs and Salisbury grounded out to drive in a run. Damron scored on a wild pitch.
St. Joseph added four more runs in the second to lead 9-0.
With one out, Jimmy Mahlmeister, Elijah Rowe and Jackson Rowe all singled for a run. Stuntebeck walked to load the bases and Michael Mahlmeister delivered a two-run single.
Damron singled to load the bases and Stuntebeck scored on a wild pitch.
The lead went to 11-0 in the third.
Sheridan and Jimmy Mahlmeister singled, a wild pitch moved them up and Elijah Rowe hit a sacrifice fly. Jackson Rowe then singled home the second run.
The Flyers got their final run in the bottom of the fourth when Mark Hodges reached second on an error, went to third on a balk and scored on a hit by Weber.
The Flyers visit Coal Grove on Monday.
South Point 000 00 = 0 3 0
St. Joseph 542 1x = 12 12 0
Levi Lawson, Brendan Dillon (2) and Gage Chapman. Jimmy Mahlmeister and Michael Mahlmeister, Drew Brown (4). W-J. Mahlmeister (K-4, BB-2). L-Lawson (IP-1.1, H-6, R-9, ER-9, K-1, BB-2, HBP-3). Dillon (IP-2.2, H-6, R-3, ER-2, K-4, BB-0, HBP-3). Hitting-SP: Brendan Dillon 1-2 2B, Blaine Freeman 1-2, Xathan Haney 1-2; St.J: Jimmy Mahlmeister 3-3, Elijah Rowe 2-2 RBI, Jackson Rowe 2-3 2-RBI, Michael Mahlmeister 1-1 3-RBI, J.C. Damron 2-2 2B 2-RBI, Max Weber 1-3 RBI, Matt Sheridan 1-2.

Jim Walker jim.walker@irontontribune.com PORTSMOUTH — From the start of the game to the end, the South Point Pointers got better,... read more