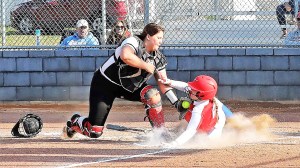 COAL GROVE — Jaidyn Griffith might have asked if the Coal Grove Lady Hornets could have some additional senior nights only with some better team results.
Griffith celebrated senior night on Friday by hitting a pair of home runs and driving in four runs but it wasn’t enough as the Lady Hornets fell to the Portsmouth Lady Trojans 10-7 in an Ohio Valley Conference game.
Griffith hit a home run in the first and third innings. Griffith, Kaleigh Murphy and Rylee Harmon all had multiple hits for the Lady Hornets who had eight as a team.
Madison Perry had four hits for the Lady Trojans with an RBI in the first inning when both teams scored three runs.
After Griffith’s home run gave Coal Grove a 5-3 lead in the third, Portsmouth got two runs in the top of fifth to tie the game and then scored five in the sixth to take a 10-5 lead.
Coal Grove rallied with two runs in the bottom of the seventh only to fall short.

Staff Report COAL GROVE — The Coal Grove Lady Hornets off to a fast start, and then had to slow... read more