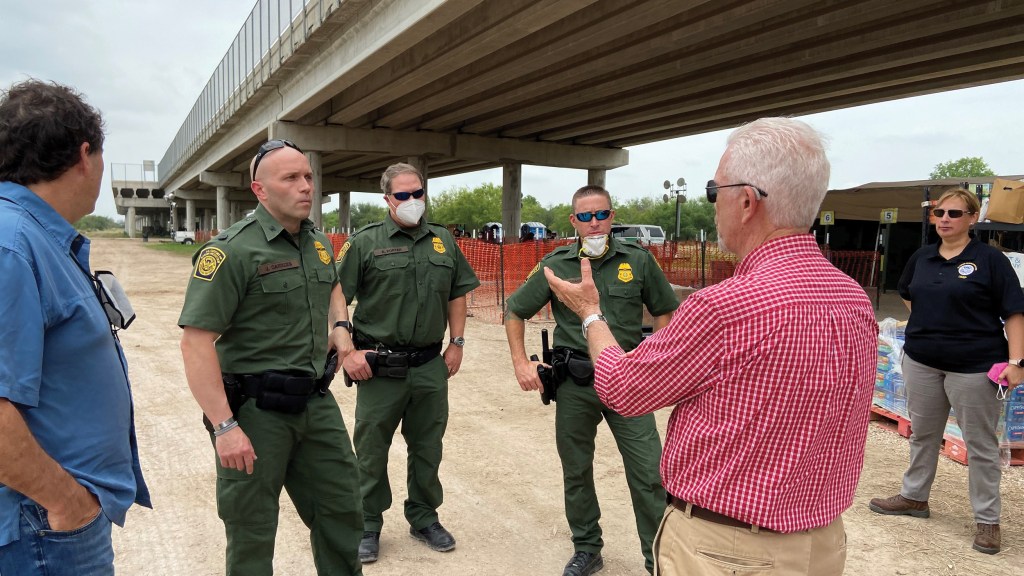 U.S. Rep. Bill Johnson, R-Ohio, made a visit to the U.S.-Mexico border this week, where he visited processing facilities, a portion of the physical border wall and the Hidalgo and Pharr International Bridges. (Submitted photo)

Calls on Biden and Harris to tackle immigration

WASHINGTON — U.S. Rep. Bill Johnson, R-Ohio, was part of a three-member group of Congressional Republicans from the region who paid a visit to the U.S.- Mexico border this week to highlight what they say is a crisis with undocumented immigration.

Johnson, whose southeastern Ohio district covers Lawrence County, made the trip on Wednesday with U.S. Reps. Mike Kelly, of Pennsylvania, and Troy Balderson, of Ohio.

During their tour of the border, the three representatives visited see the U.S. Border Patrol Facility in Donna, Texas, the Health and Human Services Delphi Site, a Temporary Outdoor Processing Site (TOPS), the physical border wall, and the Hidalgo and Pharr International Bridges.

In March, the number of unaccompanied children encountered by U.S. border authorities reached nearly 19,000, the highest number on record in the third major surge of families and children from Central America since 2014 under both Democratic and Republican administrations.

Johnson said the surge in immigration was due to policies of President Joe Biden.

“Yesterday, I witnessed firsthand the humanitarian, health, and national security crisis the Biden Administration has created on our southern border,” he said in a statement on Thursday. “By reversing President Trump’s immigration policies, such as cancelling the border wall construction and reinstating the ‘catch and release’ policy, our border patrol agents have been put in a nearly impossible position.”

Johnson said he spoke with border agents, who told him “without consequences, migrants will continue to flood our border at an extremely high rate.”

Johnson said the border has also served to allow illegal entry for the drug fentanyl, a major factor in the overdose epidemic.

“The U.S.-Mexico crossing is a major entry point for this poison that is spilling into communities across Ohio and the country,” Johnson said, and called on Biden and Vice President Kamala Harris to visit the border.

“(They) should have visited the border since taking office, but I understand why they haven’t,” Johnson said. “If they visit the border, the White House Press Corps would visit as well… and then no one will be able to deny the crisis that we are dealing with. Ignoring the crisis at the southern border will not make it go away, Mr. President. Come see it for yourself…maybe that will compel you to act.”

Biden raised the issue of immigration during his address to a joint session of Congress last month.

“Let’s end our exhausting war over immigration,” Biden said. “For more than 30 years, politicians have talked about immigration reform, and we’ve done nothing about it. It’s time to fix it. On day one of my presidency, I kept my commitment and sent a comprehensive immigration bill to the United States Congress. If you believe we need to secure the border, pass it, because it has a lot of money for high-tech border security.”

Biden also called on Congress to pass a “pathway to citizenship for those who have overstayed visas, as well as others.

“Let’s at least pass what we all agree on,” Biden said. “ Congress needs to pass legislation this year to finally secure protection for DREAMers – the young people who’ve only known America as their home, and permanent protection for immigrants who are here on temporary protective status who came from countries beset by man-made and natural-made violence and disasters, as well as citizenship for foreign workers who put food on our tables.”