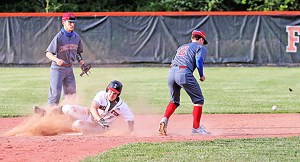 Ironton Fighting Tigers’ Cameron Deere (9) slides safely into second base during Tuesday’s game against the Northwest Mohawks. Ashton Duncan and Trevor Kleinman combined for a no-hitter in an 8-0 win. (Photo By Tim Gearhart)

It was Ringo Starr in his post-Beatles career who had the hit record called “The No-No Song.”
On Tuesday, Ashton Duncan and Trevor Kleinman were singing it in harmony.
The Ironton Fighting Tigers’ pitching duo combined on a no-hitter in an 8-0 shutout of the Northwest Mohawks. 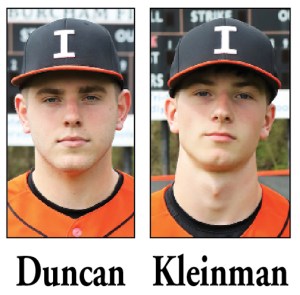 Duncan started and went four innings for the win. He struck out five and walked one. Kleinman went the final three innings striking out eight and walking one.
Kleinman also went 2-for-3 at the plate with a double and two runs batted in.
Ironton (19-5) had nine hits with Cameron Deere going 2-3 with a double, Jacob Sloan 1-2 with a double, Cole Freeman 1-4 and two RBI, Ryan Ashley two RBI and Chaydan Kerns was 1-1 with a triple and an RBI.
Ironton got all the runs it needed in the first inning by taking a 4-0 lead.
Kyle Howell and Jon Wylie singled, Deere was hit by a pitch to load the bases and Freeman had a two-run single.
Connor Kleinman was hit by a pitch and, Trevor Kleinman singled in a run and Ashley grounded out as a run scored.
The Fighting Tigers added a run in the third when Sloan walked, Trevor Kleinman was safe on an error and Ashley grounded out driving in the run.
Ironton scored a run in the fifth when Sloan doubled and Trevor Kleinman singled him home.
The final two runs scored in the sixth.
Wylie was safe on an error, Deere reached on a dropped third strike and an error on the play allowed Wylie to score.
Kerns made the error academic as he lined a triple into the gap in centerfield driving home Deere with the final run.
Ironton visits Jackson on Thursday.
Northwest 000 000 0 = 0 0 3
Ironton 401 012 x = 8 9 1
Kazane Akimoto and Orville Tackett. Ashlton Duncan, Trevor Kleinman (5) and Cole Freeman. W-Duncan (IP-4.0, H-0, K-5, BB-1, HBP-1). Kleinman (IP-3.0, H-0, K-8, BB-1). L-Akimoto (ER-5, K-4, BB-1). Hitting-Northwest: None; Ironton: Kyle Howell 1-4, Jon Wylie 1-4, Cameron Deere 2-3 2B, Cole Freeman 1-4 2-RBI, Jacob Sloan 1-2 2B, Chaydan Kerns 1-1 3B RBI, Trevor Kleinman 2-3 2B 2-RBI, Ryan Ashley 2-RBI.