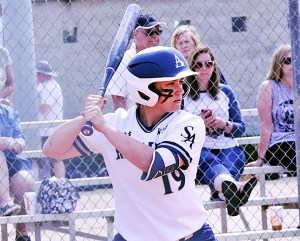 Ironton’s Bre Klaiber awaits a pitch during an earlier game this season. Klaiber was named the Northeast-10 Conference Northest Division Player of the Year. (Courtesy of St. Anselm Sports Information)

GOFFSTOWN, NH — Looking at the statistics, it was easy to award Bre Klaiber the Northeast-10 Conference Player of the Year in the Northeast Division.
But when tracing her college career the past four seasons, she would have been the landslide winner of the “Outstanding Character and Determination Award” if there was such an honor.
The Ironton native began her career at Long Island University-Post where she earned East Coast Conference Rookie of the Year honors.
But LIU-Post dropped its program after her freshman season and she transferred to St. Anselm 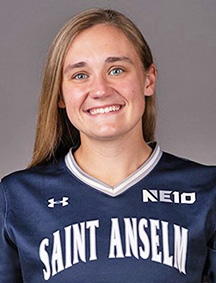