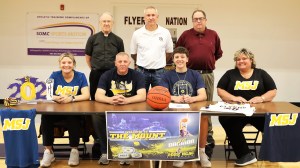 Damron was a first team Division 4 Southeast Ohio All-District selection this past season and special mention All-Ohio. He was honorable mention All-Ohio last season.
Damron averaged 17 points and 6.0 rebounds per game. He racked up more than 500 career rebounds with his jumping ability that was a trait he probably picked up from his father Chris who was the Class AA state high jump champion for Rock Hill.
He just missed becoming a member of the 1,000-point club due to the loss of games this past season for COVID-19 shutdowns. Despite just missing on the 1,000 career points, Damron was not lamenting what could have been but was happy with what he accomplished.
“That’s just the way it goes. I’m happy I just got close to it. It was crazy to get 500 rebounds. To think I could have gotten a thousand points, I’m just lucky. I’m very thankful for it. Even if I didn’t get a thousand it doesn’t matter to me. Just winning games was the main thing for me,” he said.
Flyers’ coach Chris Barnes noted that Damron scored 20 or more points and had double digit rebounds in five straight games.
“I’ve coached for 35 years and I’ve never had a player do that,” said Barnes. “I think he has a great future ahead of him. He’ll be able to just focus on basketball and he’ll get bigger and stronger. He’s a great player and he’s a great person.”
Damron talked to Heidelberg, Franciscan University and Alice Lloyd in Kentucky before settling on Mount St. Joseph which is located in Delhi Township near Cincinnati.
The school has an enrollment of approximately 1,869 students and 336 postgraduate students with an academic staff of 123 which was very attractive to Damron.
“Just from talking to their coach and their class sizes and how their school is basically like the school I go to now, it’s just the perfect fit for me,” said Damron.
Besides his basketball skills, Damron plays soccer and baseball. He was All-Southern Ohio Conference in soccer as he helped the Flyers win two straight SOC titles and reach the district finals the past two seasons.
Although his dad was a track star and his mom Tricia is the volleyball coach at Coal Grove, he admits that his first love has always been basketball.
“Basketball is my favorite since I was a little kid. I went to a bunch of high school games. I just loved to watch basketball games. With the opportunity to play (at the college level) was just a dream come true,” said Damron.
The awards and personal achievements were nice, but Damron said the most fun was playing with his teammates and helping the team to great success including a berth in the district finals.
“Ever since coach (Chris) Barnes came here, he gave me the opportunity to play and I can’t thank him enough. What he did for our school was awesome,” said Damron.
“I’m just happy I got to experience going to the Convo (Ohio University Convocation Center) because I always wanted to go there. We went and watched (the Flyers) the year I was an eighth grader and they lost. I was happy to go there and to win a game there was awesome.”
Damron said the NCAA Division III Lions — a member of the Heartland Collegiate Athletic Conference — have had a tradition of freshmen who contributed to the program. He said the Lions have had the conference Freshman of the Year the past two seasons.
However, he is not putting any pressure on himself and the only goals he has are to work hard and hope to contribute.
“Basically, they want me to do what I did here. Just go in there and get rebounds and fit with them,” said Damron. “They said they’d give me the opportunity if I just go in there and practice and work hard and outplay the other players. I just want to get some playing time and help the team win.
“I’m really excited. It’s going to be a challenge because it’s a way different atmosphere than what I had going against in high school. But if I put in the work and do what I’m supposed to do, I think I can succeed at the next level.”
Damron plans to major in sports management.
“It’ll enable me to work with marketing for major league teams and stuff like that. I’m really excited for that,” said Damron.
“The location in downtown Cincinnati you’ve got two major league sports teams, now you’ve got a soccer team going down there, just a bunch of high-level colleges to work for down there.”