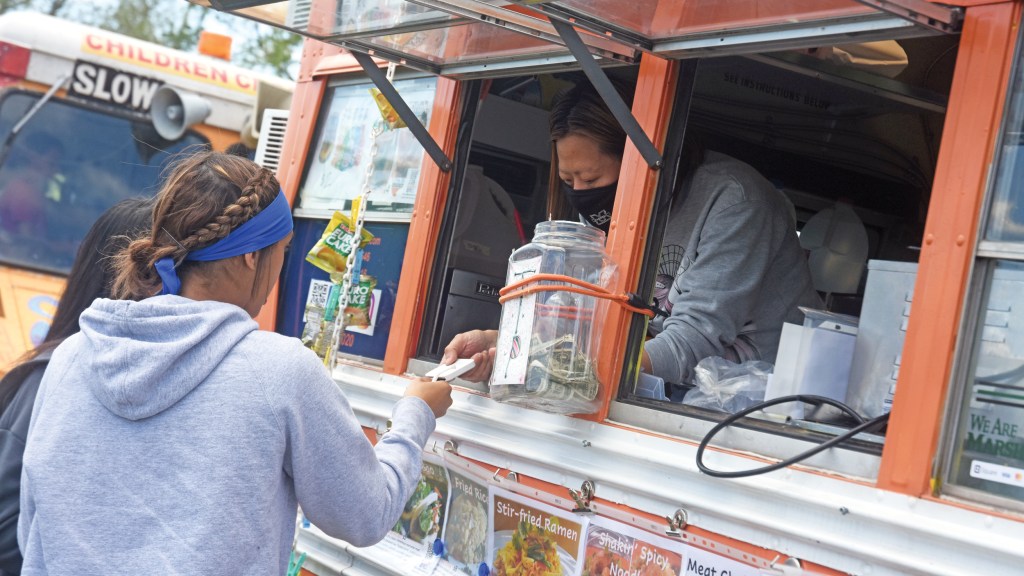 SOUTH POINT — “There have probably been around 1,000 people through here so far,” Mayor Jeff Gaskin said of the turnout for South Point’s first food truck rally of the year on Saturday.

As of 2 p.m., he said turnout had been steady and estimated about 100 were there at that moment.

“And it’s been like this all morning,” he said.

The food truck rallies started last summer, with the village hosting three, offering a safe, socially-distanced event at the height of the pandemic.

For Saturday’s event, 11 trucks lined Veterans Park. He said one had seen such high demand that it had left once to resupply, came back and then sold out again.

Some of the trucks were returning vendors, while others were there for the first time.

Gaskin said they tried to invite a diverse group, so that no menus would be repeated.

One the first-time vendors for the event was Bite Mi Asian Street Food, of Barboursville, West Virginia, run by Hanh Nguyen and Kae Bradley.

Nguyen said they had seen strong sales through the morning and afternoon.

“It’s been wonderful,” she said of the event. “And we didn’t expect so many trucks.”

She said the most popular item on their menu was Bite Mi Bao, which consisted of meat and vegetables on a steamed bun.

Nguyen said they did many events, and regularly sold from Charleston to Huntington.

She said she like the array of choices offered to the crowd in South Point.

“It gives them options,” she said. “They can get everything, up to desert and ice cream.”

Next to them was Kona Ice, run by Debbie Tibbits, of Ashland, Kentucky.

“It’s been going fairly well, considering the weather,” she said of the cool afternoon. “And I’m glad to able to come.”

Across the park was That Donut Place, from Kenna, West Virginia, run by Gale Donelson, his wife and two others.

He said they do business from Charleston to the Huntington area and they sell mini donuts, as well as “gourmet donuts of our creation,” with names such as Campfire Delight, Country Roads and Hillbilly Heat.

“This is our third time,” he said. “We came twice last year.”

Donelson said business had been steady for them all morning.

Gaskin said the village plans two more rallies for later this year — one, tentatively set for June 5, and then another in August.

“We’ve been very pleased with today,” he said.