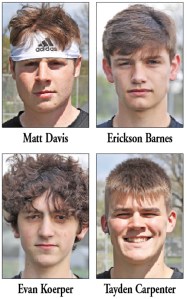 PORTSMOUTH — The Ironton Fighting Tigers’ doubles team advance to the district tennis tournament semifinals.
The Ironton Fighting Tigers’ doubles team advance to the district tennis tournament semifinals.
That’s not a misprint.
For the first time in the program’s history, Ironton’s doubles teams have made history with both teams qualifying for the district tournament.
Seniors Matt Davis and Erickson Barnes will be joined by the sophomore tandem of Tayden Carpenter and Evan Koerper in the district semifinals Saturday, May 22, in Portsmouth.
The last time Ironton had a doubles team advance from the sectional came in 1989 when the team of Dirk Foglesong and Tyler Walters not only reached the district but advanced to the first round of the state tournament.
And the Ironton duo who was coached by Charlie Kitchen were not alone when they went to the state tournament. Tim Pleasant qualified for the state tournament in singles play.
“We were the only school to have both teams make it to the second day and then both of them qualified for the district,” said Ironton coach Lovell Medcalf who is a former tennis standout for the Fighting Tigers and played collegiately at Morehead State.
Davis and Barnes lost only one doubles match the entire regular season.
They were quite the Odd Couple. Davis was an All-Ohio lineman in football and Barnes was All-Ohio in basketball.
Koerper and Carpenter were actually only thrown together recently but have made great strides.
“Matt and Erickson have work really hard and have had great success. They’ve earned everything they’ve gotten this season,” said Medcalf.
“It was a last-minute thing with Tayden and Evan.They hadn’t got much of a chance to play together but they’ve worked hard and it’s really worked out. They just put their heads down and went into each match and a game plan of what they wanted to do and it worked out. I knew theyhad the potential.”
After the first day of matches, the qualifiers were determined but the seeding was still needed so the teams played the next day and the two Ironton teams actually had to play each other.
“They had two matches on Tuesday and won both. Wednesday, they were on their last legs. It was a good match (between the two teams). It went three sets,” said Medcalf.
“These kids didn’t have the knowledge, but they put in the work and got better. I’m proud of them.”