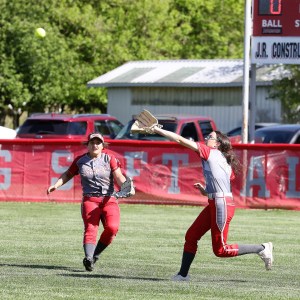 AID — The Symmes Valley Lady Vikings were radio disc jockeys on Thursday. They just kept playing the hits.
The Lady Vikings collected 13 hits as they routed the Paint Valley Lady Bearcats 16-3 in five innings to win the Division 4 sectional tournament.
“We hit the ball well tonight up and down the lineup,” said Lady Vikings’ coach Jeff “Odie” Estep. “Savannah Mart pitched well and when you get good pitching and that kind of hitting, you don’t lose too many.”
Symmes Valley (17-8) will host Waterford at 5 p.m. Tuesday in the district semifinals.
Leading the offensive output was Desiree Simpson who went 2-for-4 with a home run and five runs batted in, Joacylyn Carpenter was 2-2 with a home run and three RBI and Kaitlyn Stevenson was 3-3 with an RBI.
Savannah Mart was 1-2 with a double, Emily Estep 1-2 with two RBI, Lauren Wells and Kylee Jenkins 1-2 while Kylee Thompson was 1-3 with an RBI.
After a scoreless first inning, the Lady Vikings got four runs in the second.
Mart led off with a double, Estep walked and Wells had an RBI single. Carpenter singled for two more runs, moved up on a wild pitch, took third on a dropped third strike and scored on a hit by Stevenson.
Paint Valley got two runs in the top of the third to make it 4-2.
With one out, Kyliyah Davis walked, Smith reached on an error, Bella Stauffer put down a sacrifice and Haylee Vaughn had a two-run single.
But the Lady Vikings erupts for 8 runs in the bottom of the inning to make it 12-2.
Mart was hit by a pitch, Estep was safe on an error, Wells walked to load the bases and Carpenter walked to force in a run.
Jenkins singled for a run, Stevenson each singled for an RBI and Simpson singled home two runs. Thompson drove in another run with a hit and Kelsie Gothard was hit by a pitch to force in a run.
Simpson scored on a wild pitch, Mart walked and Estep singled for two more runs.
The final four runs scored in the bottom the fourth to create the run rule.
Carpenter led off the inning with a home run. Jenkins walked, Stevenson singled and Simpson capped the rally by blasting a 3-run homer.
Paint Valley 002 00 = 2 4 5
Sym. Valley 048 4x = 16 13 3
Machelle Stewart, Carleigh Furniss (4) and Smith. Savannah Mart and Jocelyn Carpenter. W-Matt (ER-0, K-6, BB-1). L-Stewart ((IP-4.0, H-13. R-16, ER-9, K-3, BB-7). Furniss (IP-1.0, BB-1). Hitting-PV: Haylee Vaughn 1-3, Lily Potts 1-2, Addison Furniss 1-2, Kaitlyn Norman 1-2; SV: Kaitlyn Stevenson 3-3 RBI, Jocelyn Carpenter 2-2 HR 3-RBI, Desiree Simpson 2-4 HR 5-RBI, Savannah Mart 1-2 2B, Emily Estep 1-2 2-RBI, Lauren Wells 1-2, Kylee Jenkins 1-2, Kylee Thompson 1-3 RBI.