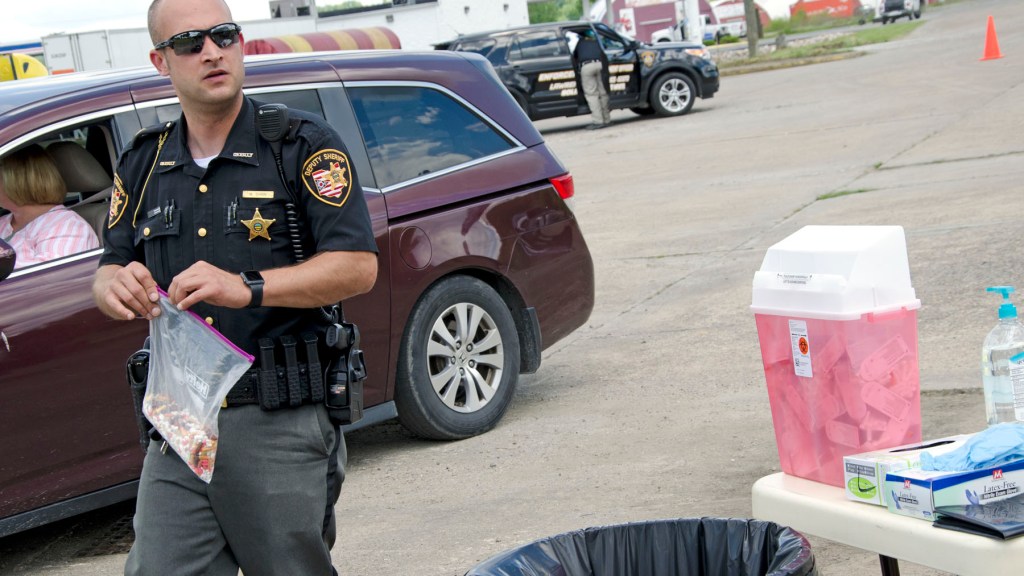 A Lawrence County sheriff deputy disposes of prescription medications that residents brought in for a clean-up event at the Grandview Inn in South Point on Friday. (The Ironton Tribune | Heath Harrison)

SOUTH POINT — Lawrence County saw a steady turnout by the halfway point of its clean up event at the Grandview Inn in South Point on Friday.

The event, organized by the Lawrence County Commission and its Project First Impression was set up for tire disposal, drug takebacks and document shredding.

She said they had collected so many old tires that they were awaiting a second truck to haul them off.

“We want to meet the need,” she said. “And I’m anticipating we’re going to need a third truck.”

She said the event was a collaboration with the Lawrence-Scioto County Solid Waste District, the Lawrence County Sheriff’s Department, the Ironton Municipal Court and its litter crew, Republic Services, who provided dumpsters, and St. Mary’s Hospital, who were handling the disposal of needles and sharps brought in for the drug takeback.

She said, as of noon, that they had seen 31 people come through the drug takeback.

“And we’ve had everything come through, from ibuprofen to Xanax to OxyContin,” one of the deputies handling collection said.

Holliday said the shredding station had also been busy as well.

“We want to make sure there are ample resources the citizens need,” she said.

She said the county plans to have to more events later this year.

She said one of those will take place on a weekend, in order to coordinate date those who could not come out on a weekday event.