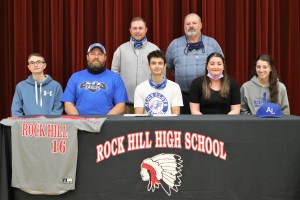 PEDRO — It seems a player for the Alice Lloyd College Eagles might be one of their recruiters as well.
Rock Hill Redmen senior infielder Nick Van Keuren had only one school in mind to continue his baseball career and he can thank his former teammate and current Eagle freshman Logan Hankins.
“Logan kind of talked me into it and then I went and visited it and it was nice. It was a smaller facility. It was like home,” said Van Keuren.

Although Van Keuren plays shortstop for the Redmen, he could be either a shortstop or second baseman for the Eagles’ who are an NAIA school and members of the River States Conference. The Eagles qualified for the NCCAA nationals.
But Van Keuren isn’t concerned which position he plays.
“I’d be happy just to play. I’ll be happy to play anywhere,” he said.
Not only did Hankins talk to Van Keuren, he also spoke to Eagles’ assistant and jayvee coach Ryne Loggins.
“Logan talked to me a little bit about him and then I got an email from him talking about wanting to come for a workout. He came in and the first thing I noticed is he had good, quick hands defensively. He could hit and do everything we wanted,” said Loggins.
“We talked to the (Rock Hill) coaches (Barry Litteral and Jerry Kidd) and they said he’s very coachable and that’s exactly what we look for in a player.”
Van Keuren also played soccer and basketball for the Redmen but he said baseball has always been his favorite sport.
“My dad pushed me to play. He got me started in tee-ball, loved it and just haven’t stopped,” he said. “My mom always pushed me to go harder and harder and I’m glad she did.”
Van Keuren said he will play baseball during the fall as well as all summer. “I play as much as I can,” he said.
Stepping up to the next level will be a a big adjustment but Van Keuren is looking forward to college baseball.
“It’s a very exciting opportunity. I look forward to it and it’s a challenge and I love challenges,” said Van Keuren.
“I’m just going to go there and try my hardest to play and then play wherever they want me.”
Loggins said the coaches always try to break the players in slowly before making any decisions.
“We’ll let him start off where he thinks he’s most comfortable at first, but it will depend on the arm whether it’s short or second,” said Loggins.
“We’ll send him a workout in the next couple of weeks that we do with every baseball player. In the fall, he’ll have a chance to produce and get better. About every freshman goes through jayvee in the fall, so they’ll get their chance to show us what they’ve got to make the 40-man roster for the varsity.”
Most of Van Keuren’s entry level goals revolve around his academics.
Van Keuren plans to major in sports management or some type of business degree.
“I definitely want to get my degree and pass all my classes. Just do all the little things,” he said.