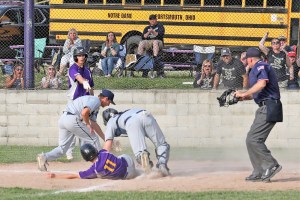 St. Joseph Flyers’ Matt Sheridan (11) scores as the ball is knocked out of the catcher’s glove in a 4-1 win over Portsmouth Notre Dame on Tuesday. (Photo By Tim Gearhart)

Bob Uecher must be in the front row, but the St. Joseph Flyers were sitting pretty because they are at the front with Jackson Rowe.
The Flyers’ senior right-hander threw just 75 pitches — 50 for strikes — as he tossed a five-hitter and the St. Joseph Flyers scored three runs in the sixth inning to beat the Portsmouth Notre Dame Titans 4-1 in the Division 4 sectional finals on Tuesday.
“Jackson didn’t have a lot of strikeouts, but he threw strikes and hit his spots well,” said Flyers’ coach Greg Bryant.
“They put the ball in play but we play good defense after the first inning and we had some timely hits. When you do that and get good pitching, you like your chances.”
Rowe struck out four and walked only one in going the distance. He also went 2-4 at the plate while his brother Elijah Rowe was 2-3.
St. Joseph (15-6) will play in the district semifinals at noon on Saturday at Lucasville Valley who blanked Leesburg Fairfield 10-0 in five innings.
Brady Medinger drew a one-out walk to start the Flyers winning rally in the sixth inning.
Matt Sheridan followed with a base hit with Medinger going to third. Medinger stole home as Sheridan got in a rundown and reached second on an error.
Jimmy Mahlmeister singled Sheridan to third to set up Mahlmeister’s steal of second and a throwing error on the play allowed Sheridan to score.
Jackson Rowe followed with a single to score Mahlmeister and cap the rally.
Rowe retired the Titans in order in the top of the seventh on two ground outs and a popup to first baseman Elijah Rowe to end the game.
The Flyers had taken a 1-0 lead in the first inning when Jimmy Mahlmeister walked, Elijah Rowe singled, Blake Stuntebeck walked to load the bases and Michael Mahlmeister walked to force home the run.
Notre Dame tied the game in the second inning with an unearned run.
Alex Cassidy had a one-out single, Matt Boldman reached on an error, Chris Schmidt hit into a force out at third but McGuire singled home Cassidy.
“We played good defense except a couple of errors early that didn’t mean that much later,” said Bryant.
“Jimmy Mahlmeister had an error early but he played a great shortstop from that point on. We moved him there midway through the season and he’s really solidified our infield.”
Notre Dame 010 000 0 = 1 5 2
St. Joseph 100 003 x = 4 8 2
Caleb Nichols and Ethan Kammer. Jackson Rowe and Michael Mahlmeister. W-Rowe (ER-0, K-4, BB-1). L-Nichols (ER-4, K-6, BB-5). Hitting-PND: Caleb Nichols 1-3, Tucker Hermann 1-3, Alex Cassidy 2-3, Jake McGuire 1-3 RBI; SJ: Jimmy Mahlmeister 1-3, Elijah Rowe 2-3, Jackson Rowe 2-4 RBI, Blake Stuntebeck 1-3, Max Weber 1-2, Matt Sheridan 1-3.