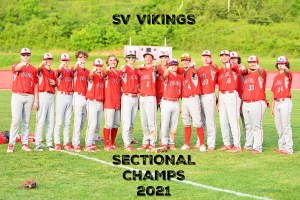 AID — Brammer brought his hammer.
Caden Brammer stymied the Trimble Tomcats on just three hits as the Symmes Valley Vikings took an 8-1 win and claimed the Division 4 sectional tournament title.
Brammer struck out 13, walked just one and the only run was unearned.
“Caden threw really well. He’s been throwing well in the past few games,” said Vikings’ coach Chad Renfroe. “We have to hit a little better, but we did what we had to do to win.”
Symmes Valley (16-5) will host Eastern Meigs at noon on Saturday in the district semifinals. Eastern beat Waterford 11-3.
Symmes Valley had eight hits with Brammer going 2-3 and Tanner McComas 2-2.
The Vikings wasted little time getting on the scoreboard with three runs in the first inning.
Levi Best singled, stole second and scored on a hit by Brammer. Brayden Webb walked and the runners pulled off a double steal and then scored on McComas’ two-run single.
Trimble got a run got its lone run in the top of the third when Todd Fouts reached on an error, moved up on a fielder’s choice and scored on Tabor Lackey’s base hit.
The Vikings came right back in the bottom of the inning and got the run back to lead 4-1.
Devin Renfroe was hit by a pitch, Levi Niece doubled and both McComas and Logan Justice walked to force in the run.
Symmes Valley made it 6-1 in the fifth.
Niece was safe on an error. McComas singled and they moved up on a passed ball. Justice then squeezed home a run and Brammer had an RBI single.
The final two runs scored in the sixth.
Renfroe walked, McComas walked and pinch-runner Luke Niece moved up on a fielder’s choice. Pinch-runner Nick Strow then stole second and a throwing error scored the run. Ethan Patterson reached on an error and he stole second with the Strow scoring on the throw.
Blake Guffey started and took the loss for Trimble. He went just 2.1 innings, allowed four hits, four runs — all earned — with three strikeouts and four walks.
Lackey had two of the Tomcats’ three hits.
Trimble 001 000 0 = 1 3 3
Sym. Valley 301 022 x = 8 8 2
Blake Guffey, Bryce Downs (3) and Tabor Lackey. Caden Brammer and Nick Strow. W-Brammer (ER-0, K-13, BB-1). L-Guffey (IP-2.1, H-4 ER-4, K-3, BB-4, HBP-1). Downs (IP-3.2 H-4, R-4, ER-4, K-5, BB-4, HBP-1). Hitting-GT: Blake Guffey 1-3, Tabor Lackey 2-3; SV: Levi Best 1-3, Caden Brammer 2-3, Brayden Webb 1-2 2B, Levi Niece 1-3 2B, Tanner McComas 2-2, Logan Justice 1-3.