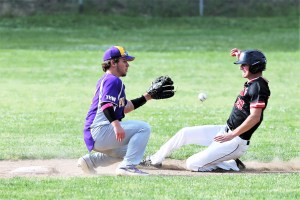 St. Joseph Flyers infielder Jackson Rowe (left) gets set to take the throw as the Wayne Pioneers’ Chase Jackson (right) slides into second base. The Flyers lost to the Pioneers 7-3 on Thursday in a non-league game. (Photo By Tim Gearhart)

The St. Joseph Flyers have had better work days.
The Flyers used Thursday’s game against the Wayne Pioneers as a needed work day but were guilty of four error and managed just four hits in a 7-3 loss.
The Flyers (16-7) play at noon on Saturday at Lucasville Valley in the district semifinals and coach Greg Bryant took the opportunity to use four different pitchers to get some work before the tournament game.
“Wayne is a pretty solid team. They play a tough schedule so it was a good tune-up for the tournament,” said Bryant.
“We only struck out three times and we hit the ball but right at them. They hit the ball. They found the gaps and we didn’t.”
The Flyers were guilty of four errors that led to two unearned runs. The pitching trio of Blake Stuntebeck, Jimmy Mahlmeister, Michael Mahlmeister and Sheridan combined to yield 11 hits with six strikeouts and one walk.
Ethan Blatt went the distance for Wayne to get the win. He struck out three, walked three and all three runs were earned.
Each team scored in the first inning as Wayne took a 2-1 lead.
Levi Cassidy singled and went to second on an error. Brayden Queen doubled to drive in the run and went to third on a hit by Cameron Cade. A throwing error allowed the second run to score.
The Flyers got a run back in the bottom of the inning when Jimmy Mahlmeister singled, stole second, went to third on a ground out and scored on a hit by Jackson Rowe.
The Pioneers went up 4-1 in the second inning.
Chase Jackson singled, stole second and scored on Brayden Jackson’s single. Brayden Jackson moved up on an outfield error and scored on a sacrifice fly by Cassidy.
St. Joseph got a run in the third when Matt Sheridan walked, moved up on a ground out, took third on a wild pitch and scored on Elijah Rowe’s ground out.
The Flyers got within 4-3 in the fifth inning.
Max Weber singled, Brady Medinger walked, Sheridan put down a sacrifice and Jimmy Mahlmeister was safe on an error as the run scored.
But Wayne scored three key runs in the sixth on a bases-clearing triple by Cassidy after Chase Jackson doubled, Brayden Jackson singled and Blatt walked to load the bases with one out.
Wayne 220 003 0 = 7 11 1
St. Joseph 101 010 0 = 3 4 4
Ethan Blatt and Cameron Cade. Blake Stuntebeck, Jimmy Mahlmeister (2), Michael Mahlmeister (4), Matt Sheridan (6) and Michael Mahlmeister, Stuntebeck (4), M. Mahlemister (6). W-Blatt (ER-3, K-3, BB-3). L-Stuntebeck (IP-1.0, H_3, R-2, ER-1, K-2). J. Mahlmeister (IP-2.0, H-3, R-2, ER-1, K-1). M. Mahlmeister (IP-2.1, H-3, R-3, ER-3, K-1, BB-1). Sheridan (IP-1.2, H-2, K-3). Hitting-WHS: Levi Cassidy 2-2 3B 3-RBI, Brayden Queen 2-4 2B RBI, Cameron Cade 2-4 2B, Chase Jackson 3-4, 2-2B, Brayden Jackson 2-3 2-RBI; SJ: Jimmy Mahlmeister 1-4 RBI, Elijah Rowe RBI, Jackson Rowe 1-3 RBI, Max Weber 1-3, Matt Sheridan 1-1.