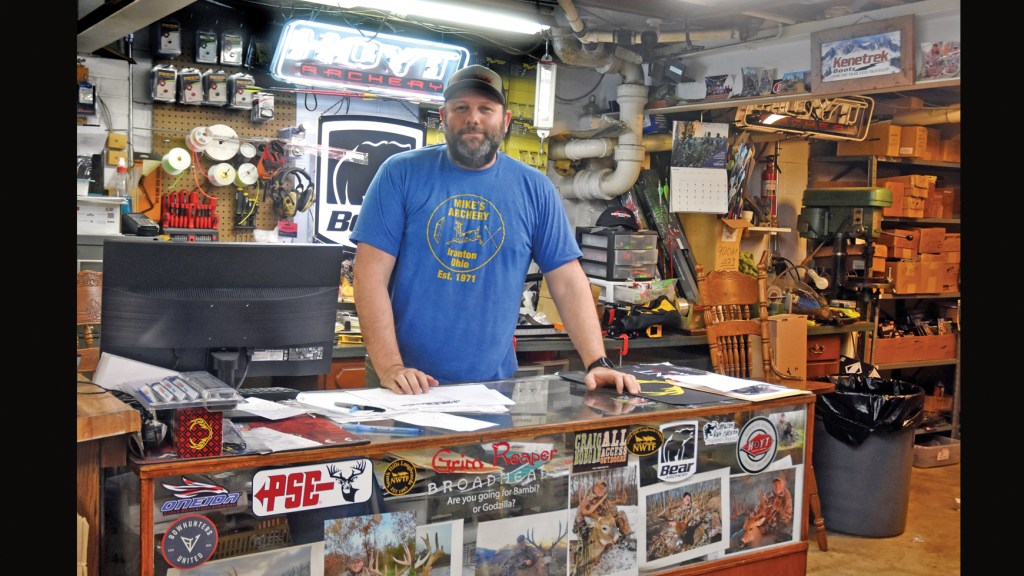 Bryan Dickess is the second generation owner of Mike’s Archery on State Route 141 in Ironton. (The Ironton Tribune | Heath Harrison)

This summer will mark five decades for an Ironton area business that is still in the family.

“They were married in April and they started in June or July,” Bryan Dickess, their son, who currently owns and operates the business as general manager, said.

He said they sell all things archery-related and hunting equipment.

In addition to local sales, Bryan said his dad started selling wholesale around the country in 1980 and shipping to dealers nationwide.

In 1996, his father retired and Bryan took over. He said, since assuming the business, they have expanded their international sales.

“When I graduated from Ironton High School in ’96, the Internet was coming on strong,” he said.

He said they regularly ship as far away as Australia, southeast Asia, Europe, southern Africa and the Philippines.

Bryan said his mother still handles accounting for the business and his father still drops by regularly.

They have seven people on staff and, while they are not related, he says they feel like “borderline family.”

“They’d have to be,” Bryan said. “Everyone has a background in archery and talks about it.”

He said they sell to special interest groups like the NRA and the Wild Turkey Federation. Bryan serves on the committee for NWTF’s chapter in Lawrence County.

And they provide equipment for the archery in the schools program in Lawrence County. Bryan is one of the coaches for the program at Sugar Creek Christian Academy.

As for what has kept the business going strong for 50 years, Bryan says it is the ability to innovate.

“It’s a lot of hard work and a lot of knowledge,” he said. “Staying on top of the most recent tech, and what is going on in the sport.”

For more information, visit www.mikesarchery.com or their YouTube channel, which features product reviews and demonstrations, at https://www.youtube.com/c/MikesArchery.