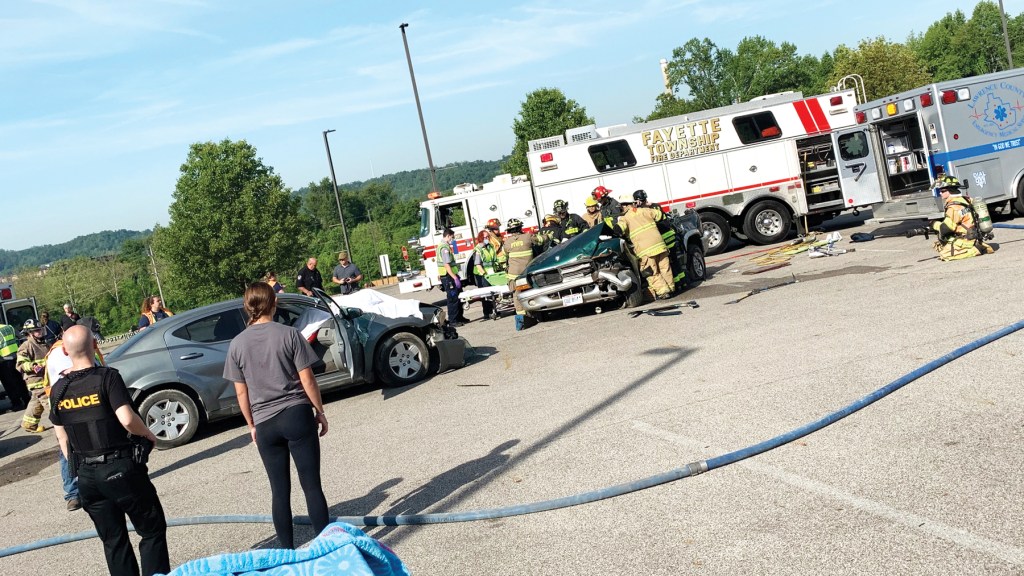 A South Point Police Department officer and Sarah Roach, a senior at the school, watch as crews work to rescue victims in a simulated car crash at South Point High School on Thursday. (The Ironton Tribune | Heath Harrison) 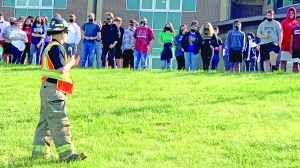 She relayed the situation to 911 dispatchers, telling them that she had been involved in a three-vehicle accident, with hers being struck by a drunk driver and that she feared her passenger, Nakyan Turner, was dead.

Within minutes fire crews and ambulances arrived on the scene, working to rescue those in the vehicles.

Lastly, a hearse from Slack and Wallace Funeral Home arrived, taking Turner’s body from the scene.

It was all a simulation taking place on the school’s parking lot, though, organized by local first responders to teach the student body, assembled on the parking lot, about the dangers of drunk driving.

“There goes one of your classmates,” principal Dean Nance said as the hearse was loaded from the grisly scene.

The simulation took place on the eve of the school’s prom, for which Nance said 180 people would be attending.

He cautioned of the dangers of drunk driving, and said that the display showed what the real thing could bring.

“The older you get, the more choices you make and the more you’re impacted by others’ choices,” he said. 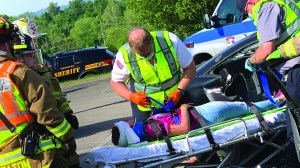 First responders carry a crash victim to a car in a simulated crash, organized by local emergency crews, at the South Point High School on Thursday. (The Ironton Tribune | Heath Harrison)

The driver who struck Roach’s vehicle was given a sobriety test by state troopers, with the student portraying the part wearing goggles that impaired his vision, simulating the effects of alcohol.

“He’s going to get 25 years,” Thomas Williams of Perry Township Fire Department, said as the driver failed the test. “And he’ll spend the rest of his life knowing he killed someone.”

He also warned of the dangers of distracted driving, stating that looking a text when driving 55 mph is not worth the risk and to stay focused on the road.

“This was a very simple accident,” he said of the cause.

After thanking the South Point students, who portrayed those in the crash, Williams pointed out the crews responding were comprised of volunteers and urged anyone 16 or over to drop by the station at 7 p.m. on Tuesday to be a part of their team.

Taking part in the simulation were South Point, Perry Township and Fayette Township volunteer fire departments. The vehicles were provided by Cogan’s Wrecker Service, located within the village. 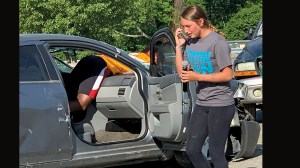 South Point High School senior Sarah Roach calls for help after her vehicle was struck by a drunk driver in a simulated crash, organized by local emergency crews, at the school on Thursday. (The Ironton Tribune | Heath Harrison)

Brian Soper, a captain with South Point, said the event was largely the work of Mathew Vanwinkle, a firefighter with the department.
“he did 90 percent of the footwork,” Soper said.

He said the departments began doing the event about seven years ago.

“We wanted a chance to show students what could happen in the blink of an eye,” he said.

Williams said they try to do the event at least every four years, so each class of students learns its lessons.

“We want to bring safety to community highlight what we go through,” he said.

Nance asked the students to keep in mind what they saw.

“I hope you remember this forever,” he said. 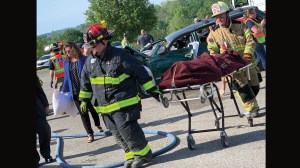