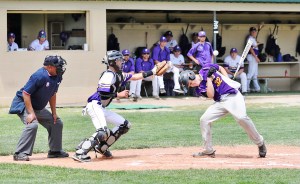 LUCASVILLE — It’s like a singer who can’t get a record to chart, so he’s done because he can’t get a hit.
The music business did a cross-over with baseball on Saturday as the St. Joseph Flyers’ offense struggled to get a hit in a 6-1 loss to the Lucasville Valley Indians in the Division 4 district semifinals.
Valley pitchers Carter Nickel and George Arnett combined on a two-hitter as the Indians advanced to the district finals.
“We just couldn’t get a hit,” said Flyers’ coach Greg Bryant. “We had the bases loaded in the third with one out and a run in and couldn’t get a key hit.
“But give their pitchers the credit. They made pitches and got us out and they didn’t make an error. The five errors hurt.”
After a scoreless first inning, Valley got three runs in the second.
Arnett led off with a single and Chase Morrow’s sacrifice attempt was booted for an error putting runners at first and second. Christopher Queen singled home a run, Nickel got an infield hit to shortstop that loaded the bases.
Morrow scored on a wild pitch and Jace Copley hit a sacrifice fly to drive in Queen.
The Flyers (16-8) had a big threat in the top of the fourth but only came away with one run.
Jackson Rowe singled, Blake Stuntebeck walked and J.C. Damron put down a sacrifice to move the runners into scoring position.
Michael Mahlmeister was hit by a pitch to load the bases and Max Weber was hit by a pitch to force home Rowe.
Valley then switched pitchers with Arnett replacing starter Carter Nickel and Arnett got a strikeout and a fly ball to left field to end the threat.
Valley answered with two runs in the bottom of the inning.
Queen singled, Nickel’s sacrifice bunt was misplayed for an error and Copley had an RBI single to center.
Blake Wood singled to shortstop to load the bases and Andrew Andronis hit into a force out at home. But Hunter Edwards grounded out to scored Copley.
The Indians got their final run in the fifth on singles by Morrow, Queen and Copley.
“Our kids played hard all season and battled from start to finish. They went 16-8 and that’s pretty darn good. I’m proud of what they accomplished,” said Bryant.
St. Joseph 001 000 0 = 1 2 5
Lucasville 030 210 x = 6 10 0
Blake Stuntebeck, Jackson Rowe (2), Matt Sheridan (5) and Michael Mahlmeister, Carter Nickel, George Arnett (5) and J Copley. W-Nickel (IP-4.1, H-2, R-1, ER-1, K-5, BB-3, HBP-2). Save-Arnett (IP-2.2, H-0, R-0, K-2, BB-0, HBP-1). L-Stuntebeck (IP-1.1, H-3, R-3, ER-2, K-2, BB-0, HBP-1). Rowe (IP2.2, H-4, R-2, ER-1, BB-1). Sheridan (IP-2.0, H-3, R-1, ER-1, BB-1). Hitting: St. Joseph: Jackson Rowe 1-4, Matt Sheridan 1-3, Max Weber RBI, J.C. Damron sacrifice; LV: Andrew Andronis 1-4, Hunter Edwards RBI, George Arnett 1-4, Chase Morrow 1-2 sacrifice, Christopher Queen 3-3 RBI, Carter Nickel 1-3, Jace Copley 2-2 3-RBI SF, Blake Wood 1-2. SB-St. Joseph: Jackson Rowe; LV: Andrew Andronis.