Ironton’s effort not good enough in loss to Piketon 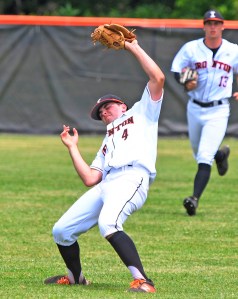 Good, better, best.
Freshman Jon Wylie pitched a good game for Ironton but junior Roger Woodruff pitched a better game and as a result the Piketon Red Streaks got the best of the Ironton Fighting Tigers 9-0 in the Division 3 sectional finals on Saturday.
Wylie went six innings allowing six hits and seven runs but only three were earned. He struck out nine and walked just one.
However, Woodruff threw a complete game allowing just two hits as he struck out 11 and issued only one walk.
Woodruff threw 87 pitches and 64 for strikes. Wylie threw 89 pitches and 62 for strikes.
“Not the way we wanted it to end after having a pretty special year,” said Ironton coach Travis Wylie whose team finished 20-7 and Ohio Valley Conference champions.
“Their pitcher was good and they have a good team. We just didn’t play our best game today. Our seniors gave us something to build on and we’ll work hard to do that. We’ll learn from this and continue to build our program.”
The game started with a bad omen for Ironton as Johnny Burton reached on a throwing error leading off. Tra Swayne got a bunt single as Burton went to third and Chase Carson was safe on an error as Burton scored. Swayne then scored on a passed ball.
After Woodruff struck out, Easton Lansing doubled home a run to make it 3-0. Logan Maynard reached first base on a dropped third strike with Lansing going to third base where he scored on a passed ball.
All four runs were unearned.
The score remained the same until the sixth when Piketon got three more runs.
After two pop outs to start the inning, Lansing singled, Maynard walked and Brody Fuller hit a two-run double. Jacob Thornsberry followed with a double to drive in Fuller and it was 7-0.
Ironton catcher Nate Bias threw to shortstop Kyle Howell to pick off Thornsberry and end the inning.
The Red Streaks scored twice in the seventh off reliever Trevor Kleinman.
With one out, Burton walked and Swayne doubled him home. Carson walked and with two outs Lansing was safe on an error as the run scored.
Woodruff retired the first 11 batters before Cameron Deere singled in the bottom of the fourth. Six more batters were retired before Wylie walked and Howell had a two-out single in the bottom of the seventh.
Piketon 400 003 2 = 9 7 0
Ironton 000 000 0 = 0 2 3
Roger Woodruff and Tra Swayne. Jon Wylie, Trevor Kleinman (7) and Nate Bias. W-Woodruff (K-11, BB-1). L-Wylie (IP-6.0, H-6, R-7, ER-3, K-9, BB-1). Kleinman (IP-1.0, H-1, R-2, ER-1, K-3, BB-2). Hitting-PHS: Tra Swayne 2-4 2B RBI, Chase Carson RBI, Easton Lansing 3-4 2B RBI, Brody Fuller 1-3 2B 2-RBI, Jacob Thornberry 1-3 2B RBI; Ironton: Cameron Deere 1-3, Kyle Howell 1-3. LOB-PHS 3, Ironton 3. SB-Ironton: Kyle Howell.