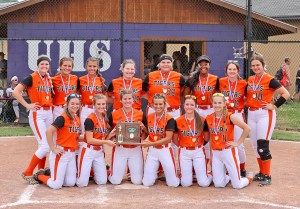 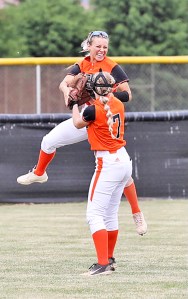 Ironton Lady Tigers’ outfielder Jada Rogers is all smiles as she leaps into the arms of teammate Kirsten Williams after the final out in a 3-2 win over Adena in the district championship game on Saturday. (Photo By Tim Gearhart)

CHILLICOTHE — Welcome back to the Sweet 16.
For the second time in three seasons, the Ironton Lady Fighting Tigers are going back to the Division 3 regional tournament after beating the Adena Lady Warriors 3-2 on Saturday to win the district championship.
Ironton (26-4) was in the regional two years ago but last season was wiped out by the COVID-19 scare.
Ironton will play at 2 p.m. Wednesday in the regional semifinals at Unioto High School. Ironton faces Westfall who blanked Portsmouth 10-0 in six innings.
The 5 p.m. game has Tucsarawas Valley against Wheelersburg. The finals are at noon on Saturday.
“Our kids did play well. We definitely had to fight to get the win over a very well-coached and very disciplined Adena team,” said Ironton first-year head coach Jim Dyer. “We made the plays that counted the most at the right time.
“Everyone counted our girl out early on in the season after only having three returning starters from our regional semifinal team two years ago and me as a new head coach. But everyone underestimates the true grit and heart that these kids have to WIN.”
Dyer said that WIN is an acronym for “Whatever It Takes” and it is posted on its dugout wall and each player reads it when going onto the field.
“And we’ve done just that,” said Dyer. “One could say that this has been a freshman team and coaching staff and we all have been learning together as we go. Our kids really don’t realize how much heart and grit they actually have until after the fact.”
Keegan Moore pitched a strong game and drove in two runs to help Ironton to the win. Katelyn Moore had a sacrifice fly to drive in the winning run.
Moore struck out 10 and did not issue a walk. Only one run was earned and seven of the nine hits she allowed were bunt singles. She threw 101 pitches with 74 going for strikes.
Greenlee Bossert went the distance for Adena (15-6). She gave up six hits, three earned runs, struck out four and walked three. She threw 97 pitches with 65 for strikes.
Adena mounted a threat in the top of the first inning.
Adena got a one-out bunt single by Kiera Williams who went to third on a double by Caelan Miner. But Moore got a pop out and then Williams was thrown out trying to steal home.
But Ironton came back in the bottom of the inning and was successful by scoring two runs.
Graycie Brammer walked and courtesy runner Braylin Wallace went to third on a double by Kirsten Williams. Keegan Moore helped her own cause with a line drive two-run single.
The score remained the same until the fifth when Adena tied the game.
After a strikeout, Makayla Baxter and Cheyenne Ater each got bunt singles. Kiera Williams hit into a force play at third base but Miner singled for an RBI.
Sydney Foglesong hit a ground ball that was misplayed for an error allowing the tying run to score.
Ironton scored the winning run in the sixth inning.
Bella Sorbilli singled to lead off the inning and moved to second on a hit by Kiandra Martin. Emily Weber put down a sacrifice bunt to move the runners up a base and Katelyn Moore followed with a sacrifice fly.
Adena tried to mount a threat in the seventh.
Baxter singled and Ater sacrificed her to second. But Moore got a pop out to Weber at second base and an easy fly out to Jada Rogers in center field to end the game.
Adena 000 020 0 = 2 9 0
Ironton 200 001 x = 3 6 1
Greenlee Bossert and Emily Jones. Keegan Moore and Graycie Brammer. W-Moore (ER-1, K-10, BB-0). L-Bossert (ER-3, K-4, BB-3). Hitting-AHS: Cheyenne Ater 1-3, Kiera Williams 1-4, Caelan Miner 2-4 RBI 2B, Posey 2-3, Makayla Baxter 3-3; Ironton: Kirsten Williams 1-3 2B, Keegan Moore 1-3 2-RBI, Bella Sorbilli 1-3, Kiandra Martin 1-2, Katelyn Moore 1-1 2B RBI, Jada Rogers 1-3. SB-Ironton: Kiandra Martin, Katelyn Moore, Jada Rogers. LOB-Adena 7, Ironton 6. Sacrifice-AHS: Cheyenne Ater, Emily Jones; Ironton: Emily Weber.

Ironton’s effort not good enough in loss to Piketon