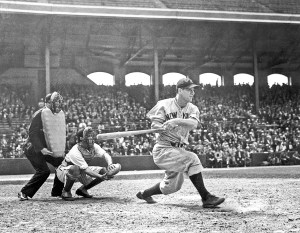 The Cincinnati Reds will celebrate “Re-Opening Day” on Wednesday when they host the Philadelphia Phillies in a 12:35 p.m. game. Major League Baseball will also celebrate June 2 as Lou Gerhig Day throughout both leagues. (Courtesy of The Cincinnati Reds.com)

CINCINNATI — Instead of a jump start, the Cincinnati Reds are opting for a re-start.
With COVID-19 restrictions being lifted, the Reds will be celebrating “Re-Opening Day” on Wednesday when they host the Philadelphia Phillies and Bryce Harper for a 12:35 p.m. game at Great American Ball Park.
The biggest result of the restriction removals will be allowing full capacity at GABP.
Fans will be able to party like it’s Opening Day, including enjoying all the excitement in the DORA district at The Banks after the game.
And for a limited time, View Level tickets are just $5 for “Re-Opening Day,” thanks to Bally Sports Ohio. This offer is available until Monday, May 31, at 11:59 p.m. ET.
Beginning June 2, health and safety measures fans should expect:
Masks will be optional and no longer a requirement for entry to Great American Ball Park.
Tickets are issued digitally via the MLB Ballpark app to allow for contactless entry.
Contactless and cashless forms of payment at concessions and merchandise stands including Reds Pay, a new mobile payment solution through the MLB Ballpark app.
The 2021 bag policy prohibits backpacks into the ballpark. Acceptable bags include Reds Heads bags, medical bags and diaper bags, which will be inspected prior to entering the ballpark.
For more information on the bag policy and all ballpark protocols, please visit reds.com/GuestGuide.
Also taking place on Wednesday is the inaugural Lou Gehrig Day in Major League Baseball. This new league-wide day has been created to honor Gehrig’s legacy and raise awareness about ALS throughout the world.
Pre-game ceremonies will honor local figures and groups who have been integral in the fight against ALS, while a commemorative 4-ALS patch will be worn by all uniformed personnel and featured on items such as base jewels and lineup cards.
The first 15,000 fans at the game will also receive a commemorative Lou Gehrig oversized baseball card, thanks to Humana.