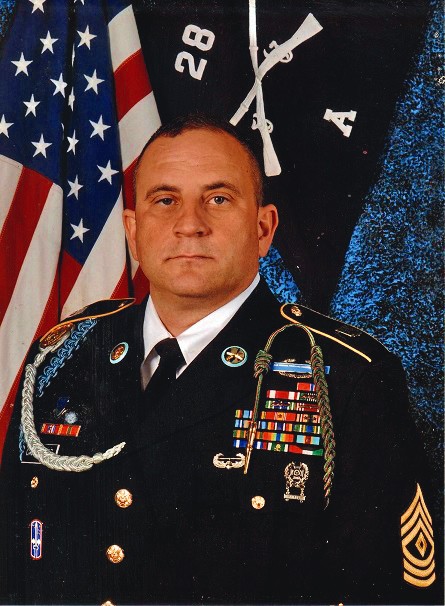 He is the Lawrence County Veteran’s Services officer and spent 26 years in the U.S. Army, achieving the rank of first sergeant.

Carpenter graduated from Dawson-Bryant High School and Collins Career Center in 1986. After graduation, he signed up with the U.S. Army.

During his quarter century in the Army, he had five combat deployments, including in Saudi Arabia for Desert Shield, Kuwait for Desert Storm, two tours in Iraq for Operation Iraqi Freedom and in Afghanistan for Operation Enduring Freedom, as first sergeant with the responsibility for 380 men.

He was also involved in peacekeeping missions in Bosnia, Kosovo, Germany and Korea.

He completed basic and advanced leadership courses, the first sergeant course and the warrior leader course, which he later taught in Germany.

After he retired from the U.S. Army in 2014, he returned to Lawrence County. He spent about a year working in at a big box chain store before deciding he didn’t like it since it wasn’t as disciplined as what he was used to in the service.

He heard that there was an opening in the Lawrence County Veteran’s Service Office and applied there, getting the job of helping veterans with things like filing paperwork and getting access to the programs that veterans are entitled to.

“Working with veterans seemed like something I would like to do,” he said. “The thing about veterans is that we understand the structure of this job and, being a career veteran, I knew the ins and outs of how to deal with the Department of Defense and the VA better than somebody that served a few years.”

He found that the job of being a veteran’s service officer fit quite well with his years as a first sergeant.

“And I could use my rank to get in places that others normally couldn’t,” Carpenter explained. “As first sergeant in Afghanistan, basically I ran the daily business of the company, all the inner workings of the company. And one of the key duties of the first sergeant is making sure all the administrative duties were done and that’s kind of what this job falls into. It’s almost parallel to what I was doing.”

Besides his duties as a veteran’s service officer, he has taken on a number of tasks that go beyond his job description. He worked with the RAMTEC program at Collins Career and Technical Center to refurbish the 75mm cannon at Woodland Cemetery, helped create the Lawrence County Veteran of the Year award, acts as the county liaison with the annual Wreaths Across America ceremony at Woodland Cemetery in the fall, helped revitalize the Veterans section at the cemetery and assisted with the William C. Lambert Museum in the Ironton City Center.

He is also a member of the VA Mental Health Counsel at the Hershel “Woody” Williams VA Hospital and is active with the Symmes Valley Veterans Honor Guard.