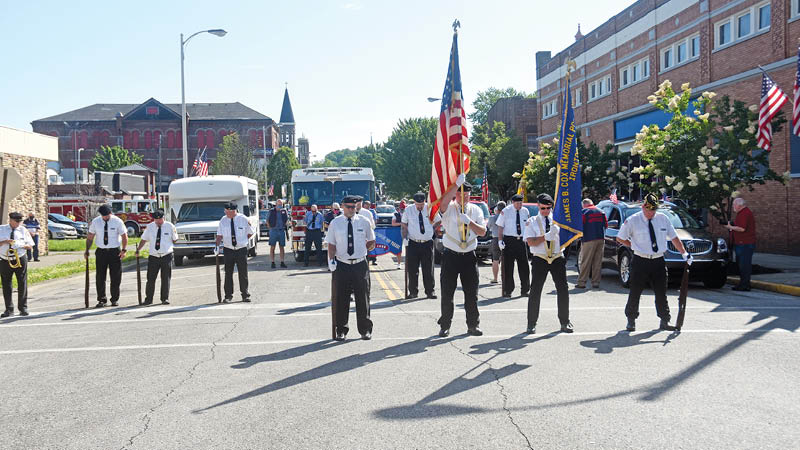 There are 11 divisions in this year’s parade and nine of the divisions are renamed this year for service men and women who have died.

Families and friends submit information about their loved one to the parade committee, which selected 10 honorees (Typically, there are 12 divisions). Following the division banner is the banner bearing the name of the honoree.

Long joined the Army in 1963 and by June 30, 1966, was serving as a Sergeant in Troop C, 1st Squadron, Fourth Cavalry Regiment, 1st Infantry Division. On that day, Long’s unit came under heavy enemy attack during a reconnaissance patrol.

During the battle, a hand grenade was thrown near Long and the crew of a disabled armored personnel carrier. He threw himself on the grenade, successfully protecting his fellow soldiers while sacrificing his own life.

He was 26 years old. His citation read: “For conspicuous gallantry and intrepidity in action at the risk of his life above and beyond the call of duty.

Troops B and C, while conducting a reconnaissance mission along a road were suddenly attacked by a Viet Cong regiment, supported by mortars, recoilless rifles and machine guns, from concealed positions astride the road. Sgt. Long abandoned the relative safety of his armored personnel carrier and braved a withering hail of enemy fire to carry wounded men to evacuation helicopters.

As the platoon fought its way forward to resupply advanced elements, Sgt. Long repeatedly exposed himself to enemy fire at point blank range to provide the needed supplies. While assaulting the Viet Cong position, Sgt. Long inspired his comrades by fearlessly standing unprotected to repel the enemy with rifle fire and grenades as they attempted to mount his carrier.

When the enemy threatened to overrun a disabled carrier nearby, Sgt. Long again disregarded his own safety to help the severely wounded crew to safety. As he was handing arms to the less seriously wounded and reorganizing them to press the attack, an enemy grenade was hurled onto the carrier deck.

Immediately recognizing the imminent danger, he instinctively shouted a warning to the crew and pushed to safety one man who had not heard his warning over the roar of battle.

Realizing that these actions would not fully protect the exposed crewmen from the deadly explosion, he threw himself over the grenade to absorb the blast and thereby saved the lives of eight of his comrades at the expense of his life.

Throughout the battle, Sgt. Long’s extraordinary heroism, courage and supreme devotion to his men were in the finest tradition of the military service, and reflect great credit upon himself and the U.S. Army.”

He was awarded the Purple Heart and Medal of Honor.

William Joseph Williams was, at his death, one of the oldest and most active members of the Ironton Lawrence County Memorial Day Parade.

He was honorary grand marshal in 2004. He had been grand marshal, parade commander and just about everything else in the years before then. He had served for so long and was such an ardent supporter of the parade, other committee members often called him “Mr. Parade.”

Williams is credited with promoting church involvement — he was a minister himself — and with helping organize the annual Navy Night service that is always the Thursday before Memorial Day.

The parade committee so respected Williams that it named its outstanding service awards for him.

Williams was a U.S. Army veteran during World War II and was stationed in the Philippines. Williams died in 2004 at the age of 84.

Gary Stout graduated from Ironton High School in 1953 and enlisted in the U.S. Air Force the next year, where he attended electronics, special weapons and AF instructor schools and was also trained in explosive ordnance disposal.

He served overseas in Okinawa, Japan and Greece and taught enlisted and officers weapons class, was a weapon maintenance team member and was chief of teams and served on a military burial detail for one year.

Stout retired from JCPenney after 20 years and served as parade commander and a division leader for the Ironton-Lawrence County Memorial Day Parade, was a member of the Ironton Lions Club and First United Methodist Church.

Phillip Russell Carter, of Ironton, was born April 30, 1938, in Huntington, West Virginia, to the late Hazel and William Carter.

He was a member of Triedstone Baptist Church in Ironton, a U.S. Army veteran and a member of American Legion Post 509, from which he retired.

Dean Cooper, a veteran of the U.S. Army, was known for his advocacy for those who served.

He was appointed to the Lawrence County Veterans Commission, where he served for 43 years. While there, he was successful in the getting the courthouse square renamed as “Veterans Square” and assisted in obtaining a Soldiers Plot section at Miller Memorial Gardens.

A Lawrence County adult probation officer from 1997-2000, he worked as advertising service manager, printer and carpenter for the Huntington Publishing Company for 43 years.

He was inducted into the Ohio Veterans Hall of Fame in 2018 and was named Lawrence County Veteran of the Year that same year.

Elmer Eddie Edwards was born on Sept. 18, 1924, and was raised on the family farm on Pleasant Ridge in Rome Township.

Edwards joined the U.S. Army during World War II in 1943 and served in Normandy, Northern France, Rhineland and Central Europe.

He was awarded the Good Conduct Medal, the European-African-Middle Eastern Theater Service Medal with four Bronze Stars and a Victory Medal.

He served many years as a director of the Lawrence County Fair Board, was a rural letter carrier for more than 30 years, a Rome Township trustee for more than 20 years and an elder for the Rome Church of Christ from 1973 until his passing in 2015.

He was a retired electrician of Dayton Malleable Co. and a member of Triedstone Missionary Baptist Church, where he served as a former pastor. He also was former interim pastor of Calvary Baptist Church in Huntington, West Virginia.

A son of the late Coss Ford Sr. and Serena Ford, he was the husband of Laura Ford.

Ford died Dec. 29, 2005 at age 80 and was buried in the soldier plot at Woodland Cemetery with military honors.

“Wolfie” graduated from Ohio University in 1961 and later The Ohio State University School of Law.

Wolfe served in the U.S. Navy during Vietnam, where he was a lieutenant on the aircraft carrier U.S.S. Hornet of the Pacific Naval Fleet.

He retired after 47 years as a lawyer, ending his career at Wolfe and Bentley. He served as part-time judge for the Ironton Municipal Courts and as an assistant prosecutor.

He was a manger at Jack Wolfe Chevrolet and served for 45 years with the Ironton Tiger Clan athletic boosters, eight years on the Ironton school board and was a sponsor of many local athletic teams.

Wolfe was a member of Christ Episcopal Church, Ironton VFW Post 8850, the American Legion, the Bellefonte Country Club and a trustee at Ironton Elks #177.

He received an OHSAA state award for his athletic service and was inducted into the HIS Athletic Hall of Fame in 2016.

Jed William Utsinger worked at Ohio University Southern for 23 years, serving in many roles on the campus, including coordinator of research and computer services.

He taught computer science, mathematics and statistics and was instrumental in many campus training initiatives.

Utsinger earned his master’s degree in business administration from Morehead State in 1987 and had an Associated of Applied Sciences from the University of Kentucky.

Hartwig served six years in the U.S. Army Reserves and was honorably discharged in 1963 with the rank of SP4.

After the military, Hartwig worked for Kyova Pipe in Ironton, was a millwright for Millwright Local 1519 in South Point for 50 years, and was owner and operator of Hartwig Excavating in Kitts Hill for 39 years, before retiring in 2012.

He was a member of New Valley Missionary Baptist Church, where he was a deacon, and American Legion Post 806.

The only one of his siblings to reach adulthood, he attended Ironton High School and Phillips Military Academy and graduated from Yale University in 1914.

In 1917, he was commissioned as a captain in the Coast Artillery Corps.

At age 27, Gilfillan applied for the very first American tank school, commanded by Col. George S. Patton (who would go on to achieve legendary status as a four-star general in World War II).

At the time, the tank was new and state of the art, so only the best and brightest were considered for the program.

The American Tank Corps were tested at the Battle of Argonne Forest in northeastern France on Sept. 26, 1918, where they were met with strong resistance from German forces.

Gilfillan awoke the next morning in an Army field hospital, his bed next to Patton, who had also been injured. Due to his wounds, Gilfillan had to recover for six months before he could walk again.

He was awarded the Croix de Guerre from France, that nation’s highest military decoration, and on March 19, 1919, he received the Distinguished Service Cross, presented to him by John J. Pershing, commander of the American Expeditionary Forces (AEF) on the Western Front in World War I and the only American to be promoted to the rank of General of the Armies in his lifetime.

His military career and act of heroism served as the inspiration for “The Patent Leather Kid,” one of the last films of the silent era, released in 1927. Its star, Richard Barthelmess, was nominated for best actor at the first Academy Awards in 1929.

Due to complications from being gassed in the war, Gilfillan died at the early age of 45 on Oct. 19, 1935, at Deaconess Hospital in Ironton.

Leaving behind no children, he is buried in Plot 7 of Woodland Cemetery in his hometown.