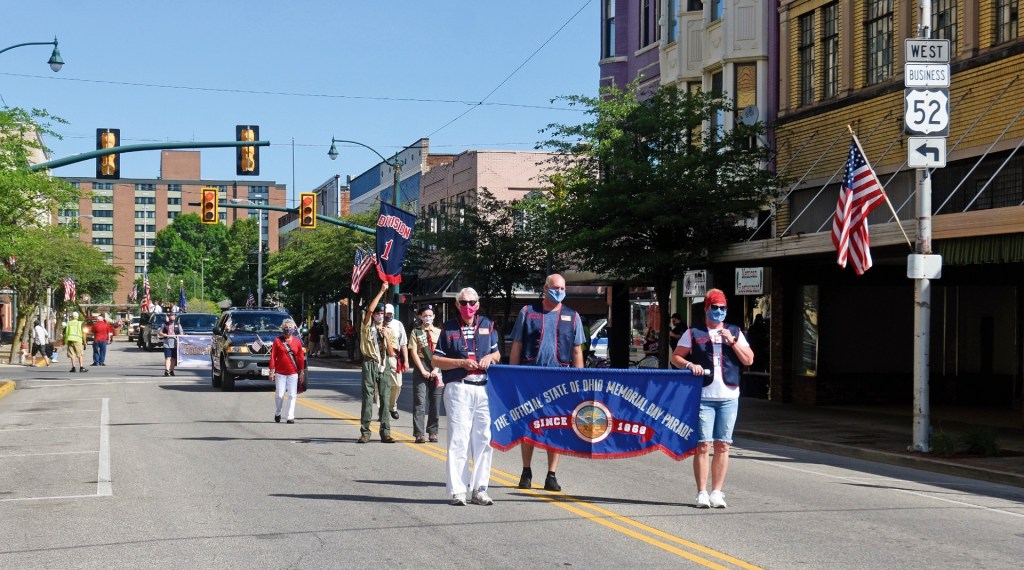 The 153 years of history of the Ironton-Lawrence County Memorial Day Parade go back as far as the holiday itself.

Honoring the Union cause

In 1868, the United States was beginning to heal three years after a bloody civil war had pit northern states against those in the south.

Following the war, the Grand Army of the Republic was established as a fraternal organization for union soldiers who had fought to preserve the United States under President Lincoln. As one of the first advocacy organizations for military personnel, it allowed veterans to network and connect under the message of “Friendship, charity and loyalty,” both socially and for political causes.

One of the G.A.R.’s chief causes was to push for voting rights for black veterans, making it one of the first racially integrated organizations in the nation.

The first commander in chief of the group was Gen. John A. Logan, who had served in command at battles such as Vicksburg and Atlanta. It was in 1868, that Logan called for D.A.R. members to decorate the graves of Union soldiers each year on May 30 for what was then known as Decoration Day.

And it was that same year that Ironton heeded the G.A.R.’s call and began hosting its annual parade, never missing a year since.

As a stop on the Underground Railroad in the decades preceding the war, Ironton, as well as Ohio, were firmly allied to the Union and sent many soldiers to fight for the cause. Camp Ironton, located at the site of the old county fairgrounds, housed the 91st Ohio Infantry, as well as other regiments.

Col. McQuigg is listed as the grand marshal of the inaugural procession in 1868, which became official the following year. The early years of the parade were much smaller than what the city has become accustomed to, featuring a procession of 40 yokes of oxen.

As the first decades of the parade went by, the event began to honor not just Civil War veterans, but those who served in conflicts such as the Spanish-American War and World War I.

By its 30th year, the holiday and the parade had become a cherished institution.

“Another Memorial Day has come and gone,” The Ironton Register, one of two newspapers that would eventually merge to form The Ironton Tribune, wrote in 1898. “Another day of flowers, parade, music, eloquence and graves decked by loving hands, goes into the record of years. Another day of sacred memory, of lofty sentiment, of solemn tribute has been added to the foundation on which the republic rests.”

That year’s parade, as had been the case since its founding, had been organized primarily by G.A.R. members, who marched the day before to the Congressional Church to her preaching by the Rev. A.G. Manville.

“He compared the civilizations that came into conflict in 1861, and eloquently depicted the result, whose beneficence not only this country, but the whole world, fells,” the Register wrote.

The next day, the parade assembled at Memorial Hall, with Capt. Harry Brown as grand marshal. A police force and band accompanied two bandwagons carrying 45 girls dressed in white, to represent the number of states in the union at the time. They were followed by G.A.R. members, the Sons of Veterans and a procession of 1,000 schoolchildren carrying flowers and flags.

“And all the morning, in all the cemeteries near the town, wherever a soldier is buried, loving hands carried the flowers of a beautiful sorrow and scattered them deeply over every grave where a soldier slept,” the Register wrote.

Accounts of the 70th anniversary parade in 1938 show that it featured a performance from the Regiment Band of the Ohio National Guard. Lester Trumbo served as grand marshal that year. And, though the Civil War was seven decades removed by that point, the parade still featured two G.A.R. members as some of the last to represent that conflict, Peter Hunter, 89, who died the following year, and Perry Brumford.

Into the modern era

Following World War II, the parade continued to grow. By the 1950s, all schoolchildren in Ironton marched in the parade, each holding a flower in one hand a handkerchief or flag in the other. It was tradition that they received their final report cards for the year at the end of the parade.

The Grand Army of the Republic was formally dissolved in 1956, after the death of Minnesota’s Albert Woodson, the last surviving Union soldier, at age 106, but the holiday it created and the parade based around it would continue for decades to come.

In 1968, one year after the federal government moved the holiday to the last Monday in May and officially designated it as “Memorial Day,” the parade marked its 100th anniversary. Heavy rains that day, the first to hit the event in decades, did not deter crowds.  This was also the first year the parade, now honoring those who served in World War II, Korea and Vietnam, was shown live on early cable television.

Ironton High School graduates rode on a float carrying a large number 100. First National Bank took first prize for their “World Peace” float, while other entries included those by OK Citizens Band Radio and the Demolay Order of Rainbow Girls.

Ohio Rep. Carlton Davidson was the keynote speaker, while one of Lawrence County’s most noted veterans was in attendance. Lt. Col. Bill Lambert, the World War I flying ace who received the Distinguished Flying Cross for his service, attended the Air Force Memorial at the County Courthouse.

About 200 people gathered at Woodland Cemetery that year to hear from the Rev. Clarence Chapman of Barracks 1750 and the main address from Jerry Wortham of Memorial Methodist Church of Coal Grove. The benediction was by Monsignor John York of St. Joseph Catholic Church.

The parade regularly draws tens of thousands of visitors to downtown Ironton. It celebrated its 150th anniversary in 2018 and had a record turnout in 2019 of 35,000.

It has made it through two world wars and two global pandemics.

Last year, rather than cancel the event due to the COVID-19 pandemic and bring to a halt its long history, organizers scaled down the line-up and held it in a shortened route, closed to spectators. Rather than attend in person and risk public health, people were asked to watch on a livestream.

This year, with vaccinations taking place and cases dropping, the event is making a full return, along with its surrounding events such as Navy Night, the Woodland Cemetery memorial service and, for the first time in many years, a fireworks display on the lead-up weekend.