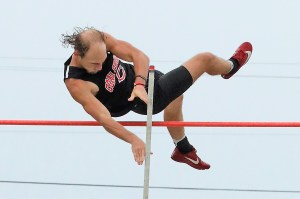 CHILLICOTHE — For the Coal Grove Lady Hornets, earning a trip to the Division 3 state track meet was as easy as 1-2-3-4.
The top four finishers in each event qualified for the state meet to be held June 4-5 at Westerville North High School and the Lady Hornets earned berths by placing first, second, third and fourth in four different events.
The Lady Hornets’ 4×400 relay team of Kylie Montgomery, Olivia Kingrey, Laura Hamm and Kylee Thomas took the gold as they had a winning time of 4:12.99.
The Lady Hornets’ 4×200 meter relay team qualified for the state meet as Montgomery, Thomas, Kingrey and Maddie McDaniel took second place with a 1:48.99 clocking.
Worthington Christian was first at 1:47.25.
The 4×100-meter relay will also make the trip to the state meet as the quartet of Addi Dillow, Montgomery, Kingrey and McDaniel was second at 52.55 seconds.
Crooksville was first at 51.36.
Montgomery also had her state meet ticket punched in the 400-meter dash as she ran a 1:00.98 to place third.
Thomas is headed to the state in the 300-meter hurdles after placing fourth at 48.26 seconds. She was fifth in the 100-meter hurdles with a 15.58 clocking.
Hamm was sixth in the 800 meters at 2:25.47.
South Point Lady Pointers’ Elaysia Wilburn was sixth in the 100-meter dash at 13.02 seconds and sixth in the long jump at 15-7.25.
Coal Grove’s Rylee Harmon was eighth in the discus at 97-feet, 2-inches.
The Lady Hornets were fourth in the regional standings with 45 points. Mount Gilead had 82, Crooksville 54 and Fairbanks 51.
In the boys’ meet, Coal Grove senior Ben Compliment — who never threw the shot put and discus until this year — got a berth in the state meet as he placed fourth in the shot put with a heave of 53-feet.
Compliment was fifth in the discus with a toss of 138-10 and teammate Perry Kingrey eighth at 134-3.
The Hornets’ 4×800 relay team of Elijah Dillon, Steve Easterling, Jeff Sparks and Landon Davis finished seventh with an 8:40 time.
Coal Grove’s Chase Hall was sixth in the 110-meter hurdles at 15.94 seconds and seventh in the 300-meter hurdles at 43.39.
The Hornets’ Morgan Schultz was seventh in the pole vault as he cleared 11-feet.
The Division I meet will be at Hilliard Darby High School and Division 2 at Pickerington North.

Cubs get wind-aided win over Reds, 1-0