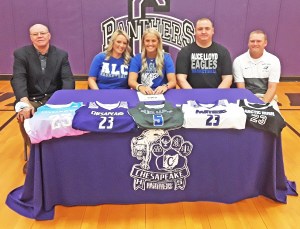 CHESAPEAKE — If you believe in love at first sight, you’ve got company with Maddie Ward.
The Chesapeake Lady Panthers’ All-Ohio basketball standout was love struck with Alice Lloyd College the first time she laid eyes on the campus.
After a whirlwind recruiting courtship, Ward completed the marriage ceremony by signing a letter-of-intent with the Lady Eagles on Thursday.
Ward said she talked to as many as 16 different schools including several messages this past week

from coaches. But Ward said she knew in a basketball second that Alice Lloyd was her future home.
“When I visited there, I knew right then that’s where I wanted to go,” said Ward. “I even told my parents on the visit, ‘can I just commit now?’ And they said we have to wait for financial stuff to come back and we have to talk it over. We talked it over and this is where I ended up.”
The 5-foot-9 Ward was the center for the Lady Panthers but she played various positions throughout a game depending on the situation.
Ward averaged 16.4 points and 10 rebounds a game this past season along with 3.0 assists and 3.0 steals. She also registered to major milestones with more than 1,000 career points and 600 rebounds.
She earned second team Southeast Ohio All-District honors and was honorable mention All-Ohio. She is a two-time All-Ohio Valley Conference first team selection.
“My freshman year I set the goal that I wanted to get 1,000 points and then my sophomore year I felt like I could get 500 rebounds,” said Ward.
“I set the goal my sophomore year and achieved it my junior year. I feel like I achieved not all my goals but part of them. Obviously, I wanted to go farther in the tournament than we did, but we also didn’t have all the girls bought in until my senior year and it was a little late for that. But I feel they have a bright future ahead of them if they keep working. A lot of the younger ones stepped up this year so Chesapeake should have a bright future.”
Lady Eagles’ head coach John Mills — who was just recently named the NCCAA national Coach of the Year — has seen plenty of Ward to know she is a good fit for the program.
“I feel she has the skill set to be a long three or stretch four at our level. She handles the ball, she passes it, she can shoot it, she needs to work getting from the perimeter to the goal but that will just come from getting a little bit more of experience at it,” said Mills.
“The thing I really like is she’s tough. That toughness translates into being a very aggressive defensive player and rebounder.”
Although Ward has the necessary tools to play for Alice Lloyd, she is well aware that she is stepping up a notch from the high school game and she knows she has plenty of work ahead.
“I’m not expecting a lot of playing time going in because I will be a freshman, but I plan on hitting the weight room hard and the gym and hopefully I’ll gradually get more playing time as the season goes,” said Ward.
“I haven’t had a chance to practice with (Alice Lloyd) yet, but I did go to Glenville State and worked out with their team and that was a very high-paced game. But with playing AAU, I feel that helps a lot, especially the high school AAU. It’s more up to speed with college so I feel I’ll be okay.”
Chesapeake Lady Panthers’ head coach Chris Ball knows all about Ward and her relationship not only with her father but her entire family.
“When I think of Maddie Ward, hard work and family come to mind. He mom and dad have pushed her to be the best that she could be,” said Ball.
“She is one of those girls that you hope your own daughter bill be like at her age. Amazing young lady on the court and in the classroom. The amount of time Maddie and coach Ward spent in the gym and weight room over the paid off today.”
Mills said he had plenty of information and film on Ward. He also relied on area coaches as well as players such as Ironton’s Riley Schreck and Portsmouth Jasmine Eley who were freshman on this past season’s Lady Eagles’ team that won the National Christian College Athletic Association national championship.
“We picked up on her from game film that the recruiting services send out plus her high school coach really promotes the kids here,” said Mills.
“We have a lot of connections in the area so we listen to them because they know what it takes to be successful at our college as a student plus they played the college game themselves and they know who has the college ability and who doesn’t. Maddie has impressed them a lot as well.”
Besides basketball, Ward played volleyball and softball as well as cheerleading. Ward said she plays golf in her free time.
“Basketball kind of ruled over everything because I started it when I was three and it was my dad’s sport when he was in high school so that built me and my dad’s relationship,” said Maddie whose father Josh also served as the Lady Panthers’ assistant coach.
“With him coaching me from when I was three until high school as well, I feel that made our relationship stronger.”
Ward also said all her coaches through the years have helped including Mark LaFon, Chris Lovely and Gage Rhoades.
“With Gage having his heart surgery in high school, I really looked up to Gage and that’s why I changed my number from 14 to 23,” said Ward.
“My mom and my grandparents have pushed me and coach Ball was really instrumental in my development the past four years.”
Ward plans to major in kinesiology with plans to become a physical therapist.
“They have a program there that if I keep my GPA above a 3.5 they will send me to (the University of Kentucky) to become a physical therapist,” said Ward.