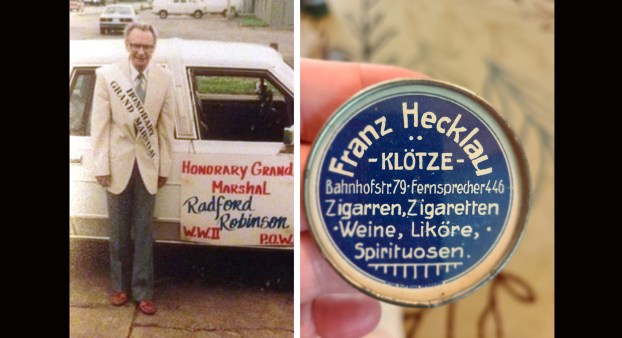 Carla Southworth: Vet was hesitant to talk about war

Radford Robinson was a reserved man from Wilgus, Ohio. A preacher. One day he decided to share his remarkable story with me, his astonished niece. I am recounting this piece of history as he told it to me.

Radford never talked about his time served in WWII, but, on that day, he said “It is just on my mind.”

Fifty years after the fact, it was still heavy on is mind. He fought in WWII, but skimmed over his time spent fighting and began telling me his story about the time he spent as a prisoner of war.

He was captured. Once captured, he was sent to a couple different POW camps but ended up based at a camp that had a huge potato farm. He grew up on a farm, so this work was familiar to him. I imagine he originally thought that it would bring him some comfort to do something he had grown up doing and that would remind him of home, but he most definitely was not home.

All of the prisoners bedded down each night in the barn. There were no comforts of a reasonable sleeping quarters, but he was out of the weather and, I suppose, that was something.

For their meal, each prisoner was given a bowl of sauerkraut broth and a piece of stale bread that was unsuitable for the German soldiers. The Germans were careful to make sure there were no remnants of kraut in the bowl, just the juice.

After eating the sauerkraut juice and bread for several days, the juice upset Radford’s stomach, so, for the next few meals, he would eat only the stale bread and leave the juice.

Some of the other prisoners heard of this deal and they too started making the trade. After several days, the prisoners that had “eaten” only sauerkraut juice, became violently ill. The salt and acid of the sauerkraut juice was too much for their digestive systems to handle. They became sick from intense diarrhea and/or vomiting. It didn’t take long before they became severely dehydrated and some of them died.

“The potatoes looked so delicious,” Radford recounted. “You could smell them as you dug them out of the ground. You could imagine the juicy, starchiness in each bite. But you’d better not eat one.”

Occasionally, someone would desperately want a potato and give in to their desire and hunger. That prisoner would pay dearly for this indulgence. He would receive a beating so vicious that the other prisoners were most definitely deterred from partaking in such disobedience.

One night, Radford and some of the other prisoners were talking (whispering because they couldn’t be caught talking) to each other and he realized that one of his co-prisoners was originally from a town very close to where he had been raised.
Radford’s new friend that he met in a POW camp, in Germany, was originally from South Point, Ohio!

When you are half the world away from home, someone that grew up 20 miles from where you grew up is practically a “next door neighbor.”

They became fast friends and remained friends for the rest of their lives. I imagine this friendship was a great comfort to them both.

After several months, as they were sleeping in the barn, a “BOOM” woke them up. Then another “BOOM!”

What was going on out there? They all ran to the wall of the barn and looked through the gaps between the barn siding. But it was too dark to see anything. “BOOM” again! Then, fireworks!

“It looked like the 4th of July – Is the town having a celebration?”

Eventually, someone busted open the barn door! All of the prisoners fell to the ground. They couldn’t be caught standing.

They were supposed to be laying down for the night. They all knew they were going to be severely punished. “This is gonna be bad.”

A loud voice came from the barn opening. “I am American. We are here to rescue you.” Could this really be happening?

Radford slowly looked up from the floor and tried to see through the dust and darkness. His eyes finally focused on the man… the soldier… the American Soldier!

The American soldiers took the “former” POWs to a nearby town. The soldiers went from house to house, removing the Germans from their homes. The soldiers would knock on the door, give the inhabitants a couple minutes to retrieve some of their belongings and place the rescued soldiers in each house, where they would stay until they were physically able to travel. This went on until every rescued soldier had proper lodging.

When it was Radford’s group’s turn, the family began begging and pleading with the soldiers, “Please don’t make us leave our home! Please!”

The soldiers continued with their mission. “Please, Please! We have children. You can have our beds and our bath and we will cook for you. Please let us stay!”

The rescued soldiers thought for a moment and decided that a hot meal would be fantastic, so they let the family stay in their home.

Radford had learned a few German words since the beginning of the war. He initiated a conversation with the home owner and they chatted for the next few days until, finally, the rescued soldiers could begin their journey back home. As Radford was walking out of the door of the house, the homeowner came running and calling for Radford.

The man said “I have something to give you so that you will never forget me.”

The man owned a tobacco and liquor store. He had little, round advertisements he would give to potential customers. On one side was a mirror and the other side had the advertisement. He wanted Radford to have it. Radford felt bad, because he had nothing to give in exchange. Radford took the mirror and they simply exchanged a handshake and a smile. Radford was on his way home.

Radford and the rescued soldiers finally made it to a hospital in the United States, in Florida. The men needed medical attention and nourishment. There was coffee and doughnuts laying everywhere in the waiting areas, “an unbelievable sight.”

Radford delighted in the hot coffee and donuts and wanted to eat more, but his stomach quickly became full. His, and all of the rescued soldiers, stomachs had shrunk so much from having so little to eat for so long, that he couldn’t finish one entire donut.

But some of the other soldiers couldn’t contain themselves. Some of them drank so much coffee and ate so many donuts that their stomachs simply couldn’t contain it all. The donuts swelled too much and their stomachs were too small. After surviving fighting in the war and being prisoners of war, they passed away in the waiting room due to the excessive eating of donuts.

The entire time Radford was away at war, his father, Isaac Robinson, would walk to the country bus stop. It was a four-mile walk through the country hills and he would walk it every single day, hoping to see his oldest child return from war and stepping off the bus. He would imagine the discussion they would have as he walked Radford home.

One day, Isaac was really sick and couldn’t walk to the bus stop. This was the day that Radford arrived in Wilgus. Radford walked and walked until he finally was home.

Knock, Knock, Knock on the front door of the homestead. He could barely wait to see his parents. He hears the doorknob turning!

“Who is this woman?? I don’t recognize her,” Radford replied.

“I’m looking for Isaac and Belle Robinson. They live here.”

She informs Radford that the family had moved while he was away, but she told him where their new place is located. So, he begins again on his journey.

Radford finally gets to the house where the woman said his family is now living.

Knock, Knock, Knock. He hears the knob turning. The door is opening. A familiar face! It’s his father! He is home.

Carla Southworth is a Proctorville resident and the niece of Radford Robinson.

Jeri Fields: A representative payee for Social Security to consider before you may need one

The future is uncertain. Our Advance Designation program allows you to pre-select a trusted individual if a time comes when... read more