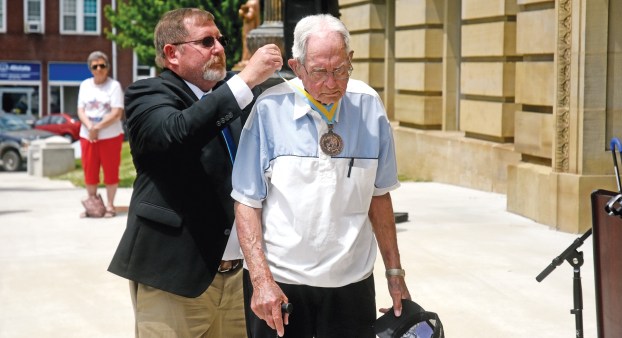 Collins, Cooper honored for their contributions

“I don’t deserve any of this,” said World War II U.S. Army veteran Buell Collins as he spoke to the crowd assembled on the Lawrence County Courthouse steps on Thursday to honor him during the Lawrence County’s 2021 Veterans’ Recognition Ceremony.

Those in attendance disagreed as he received a commendation from the state, a medal and was inducted into an infantryman’s honor society.

Collins, who said he is 97.3, said he did appreciate all the awards.

93rd District State Rep.Jason Stephens, R-Kitts Hill, who said he has known Collins for half his life, was there to read a commendation from the Ohio House of Representatives.

The commendation congratulated Collins for being inducted into the Order of St. Maurice, an honor given to infantrymen by the National Infantry Association and the Chief of Infantry.

“Your receipt of the Legionnaire Award and induction into the Order of St. Maurice are honorable distinctions that reflect your unparalled patriotism and valor,” Stephens read.

During his service, Collins received an infantryman’s combat badge, a POW medal, a Purple Heart medal, a Good Conduct medal, an American Campaign medal and a European/African/Middle Eastern campaign medal.

“Your lifetime endeavors on behalf of others have continually demonstrated responsible citizenship, for you have served as the postmaster of South Point Post Office and the Emergency Management director of Lawrence County,” Stephens said.

“And indeed, you have been a fine steward of your community.”

Collins got up to speak to the crowd and he thanked the Lord for bringing him home, his friends for helping Him to bring him home and the Lawrence County Commissioners for supporting the Veterans Service Commission.

He then grew philosophical.

“There are no winners in war, none whatsoever,” he said, pointing out that the side that wins a war and gets territory, they are now responsible for the people of it.

Lt. Col Scott Evans (retired) of the Lawrence County Veterans Commission put the Legionnaire Medal around Buell’s neck to the applause of the gathered crowd.

He also received a new American flag from the Lawrence County Commissioners.

“I appreciate that,” Collins said.

On the steps to the left of the podium was a chair covered in a red cloth and red flowers.

It represented a soldier who is not present, Dean Cooper, a U.S. Army veteran, who had done so many things in his lifetime it took about five minutes to list them all.

“He was a good, close friend of mine,” she said. “I told his family recently that I felt like I was a better person just by knowing Dean.”

She listed Cooper’s many accomplishments. Besides serving in Korea in the U.S. Army, Cooper was a long-time member of the Proctorville VFW as well as attending more than 1,000 funerals as part of its honor guard for 45 years, he was retired from Huntington Publishing Company, served as a Lawrence County Adult Probation officer from 1997-2000, was in the U.S. Army Reserve, a member of the American Legion, was involved in numerous veterans’ groups, was a past commander of the Proctorville VFW 6878, served on the Lawrence County Veterans Service Commission for 43 years, helped get a soldier’s plot in Miller Cemetery, was inducted in the Ohio Veteran’s Hall of Fame in 2018 and was named the first Lawrence County Veteran of the Year in 2018, was a Rome Township trustee from 1982-2015, and a lot more.

“If Dean was ever asked if he had won an award, he would say no,” Holliday said. “But would explain that every time he succeeded in life, and that he did, and made a positive contribution to his society, it was an honor. He did not seek glory for his efforts, but chose to remain quietly in the background supporting others.”

After Holliday spoke, the commissioners presented Cooper’s children with a new American flag.

The full ceremony is on the Lawrence County Commissioners’ Facebook page.

Getting parade ready (WITH GALLERY)