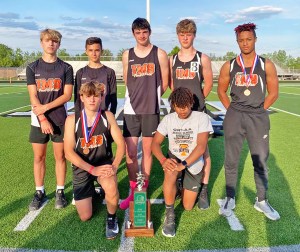 HILLIARD — The Ohio Middle School State Track & Field Meet has some impressive young talent and the Ironton Middle School Fighting Tigers were quite impressive as a team.
The Ironton Middle School Fighting Tigers made an impressive showing as their team finished tied for second place.
Ironton had 20 points and tied with Bellbrook and Pickerington Ridgeview for second place. Massillon won with 27 points.
The meet is open to all schools but there are no separate divisions. All schools regardless of size compete in one meet.
There were a total of 88 boys’ teams entered and 63 girls’ team for the meet at Hilliard Darby High School on Saturday, May 15.
Ironton’s Izaak Cox led the way with an impressive showing.
He was second in the long jump with a leap of 20-4.75 to finish just a quarter of an inch behind Tallen Hulvey of Claggett who went 20-5.
Also, Cox claimed a third place finish in the 200-meter dash with a 23.74 time.
Ironton’s 4×200 relay quartet of Braxton Slusher, Matthew Sly, Braylon Sturgill and Izaak Cox ran a 1:36.55 and placed third in the event.
The Fighting Tigers 4×100 relay team ran a 47.99 and was comprised of Braylon Sturgill, Braxton Slusher, Nick Sites and Matthew Sly and was 19th.
Ironton 4×400 team of Bryce Markins, Braxton Slusher, Braylon Sturgill and Nick Sites had a 3:56.92 clocking and was 22nd.
Fairland Middle School was led by Jeremiah Fizer who was fourth in the 110-meter hurdles. Fizer ran a 16.68 seconds time.
The Fairland Lady Dragons’ Molly Dunlap was fifth in the long jump with a leap of 16-8.25.
Fairland’s 4×200 relay team of Quentin Cremeans, Isaiah McNicol, Weston Goff and Jonathan Nida posted a 1:40.31 time and was 17th.
The Dragons’ 4×100 squad of Quentin Cremeans, Isaiah McNicol, Jack Hayden and Nonathan Nida ran a 48.49 and placed 21st.
Will Callicoat threw the discus 124-6 and was 11th while Cooper Charles was 18th in the shot put with a distance of 39-8.
Jacob Skeens of Chesapeake had a toss of 115-10 to place 15th.
The Lady Panthers’ Sophi Hutchison was 13th in the pole vault with a height of 8-8 while Addison Maynard was 14th in the shot put with a heave of 35-2.25 and Adison Lovely was 23rd in the long jump with a distance of 14-9
Rock Hill Redwomen’s Brynna Kellogg cleared 4-9 and was 13th in the high jump.
South Point Lady Pointers’ Bindi Staley cleared 7-6 and was 24th in the pole vault.
In the wheelchair events, Green’s Tate Ratliff was fourth in the 100-meter dash at 26.13 seconds.