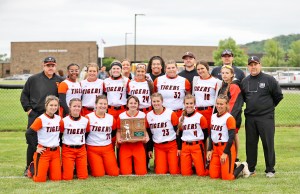 CHILLICOTHE — The loss in the Division 3 regional championship game was the end of the season for the Ironton Lady Fighting Tigers’ softball team on the surface, but it may just be the start of 2022.
Ironton lost all but two starters from the 2019 team and had four freshmen, one sophomore, three juniors and one senior in the starting lineup this season and only two players — senior Kiandra Martin and junior Keegan Moore — started two years ago and were the only players with any varsity playing experience.
Ironton finished 27-5 coming off a 26-2 team in 2019 that reached the regionals for the first time in program history only to lose 3-2.
The 2019 team was a junior-laden team with Moore the top pitcher. That team was one of the favorites to win the Division 3 state championship but never got a chance to play due to the COVID-19 shutdown of spring sports.
“This team is kinda like the special group of young ladies that didn’t get to finish their story in 202,” said Ironton Lady Fighting Tigers’ first-year head coach Jim Dyer.
“I’ve told these kids from day one that I love them like they are my own.”
Ironton began the season against a strong schedule but had just a 5-3 record. Then came a 4-1 win over Cabell Midland who was ranked the No.1 Class 3-A team in West Virginia at the time.
Dyer said the win over the Lady Knights was the turning point in the season for his young and inexperienced team.
“About midseason in the Tri-State Showcase at Raceland against Cabell Midland, our kids literally grew up. That’s when we found out that we were truly Fighting Tigers as we went onto win the game with true grit and passion,” said Dyer.
“When we were leaving for the weekend from there, I told coach (Cary) Miller that we’ve got something special here. This group wasn’t given any respect until we faced Cabell Midland and beat them and after that we simply rose to every occasion we face.”
The Lady Tigers went on a 10-game winning streak before losing 2-1 to unbeaten Portsmouth Notre Dame in 16 innings in a game that saw Moore strike out 22 batters.
From that point, Ironton went on to win the Ohio Valley Conference title for the second time and won its four straight tournament games before falling in the regional finals to top-seeded Wheelersburg.
Ironton had a .345 team batting average with 253 runs scored, 23 home runs, 214 runs batted, 71 doubles and nine triples. Ironton had a .516 slugging percentage and drew 128 walks with 206 strikeouts.
Moore hit .468 with 10 home runs and 44 runs batted in along with 14 doubles, all team highs.
Other top hitters were Bella Sorbilli who batted. 410 with three HRs and 22 RBI, Graycie Brammer .374 with four HRs and 22 RBI, Kylee Richendollar .370, two HR and 27 RBI, Kirsten Williams .306 with a home run and 19 RBI, Emily Weber .316 and Martin hit .295 with three HRs and 23 RBI.
Moore had a dominating season as the pitching ace of the staff. She pitched in 28 games with 24 starts and posted an 18-3 record. The Ohio University commit racked up 307 strikeouts as she eclipsed 500 career punch outs. She gave up 117 hits, walked just 28, gave up 46 runs with 28 earned for a microscopic 1.20 ERA.
Freshman Braylin Wallace pitched in seven games with five starts and was 2-1. In 34 innings, she struck out 45, walked 19, and had a 4.32 ERA.
Martin and Holley Dutey were the only seniors. Kayleigh Collins, Sidney Douglas, Kylie Miller, Richendollar, Jada Rogers and Moore were juniors, Kennedie Smith and Kirsten Williams sophomores while Brammer, Sorbilli, Katelyn Moore, Olivia Duncan and Kiarah Cox all freshmen.
Dyer said the program is about the players, but he said the supporting cast has been very valuable to the team’s success.
“I have to give a huge thanks to my coaches Cary Miller, Janie Morris, Amy Harper, Terry Saunders, Jeff Townsend, Andy Compliment and every who had a hand in helping out this season to make it the best it could be,” said Dyer.
“And I have to give a special thanks to all the supporting parents and fans who used their time off from work to come and watch us play.”
The past two seasons Ironton was 54-7 after going 16-11 in 2018 and 17-6 in 2017.
“The future is bright in Ironton as far as softball goes. We’ve been working with all the kids at the lower levels and they all love to come and put in the hard work that it takes to get to be a top program,” said Dyer.
“We’ve set the bar high. We will take a couple of weeks off and then get back at it to get this program to the next level.”