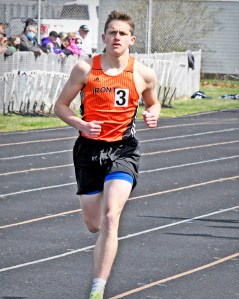 The late, great Hall of Fame running back Gale Sayers had an autobiography entitled, “I Am Third.”
If William Harrison ever does his own biography, there’s a good chance it will be called “I Am Fourth.”

The Ironton Fighting Tigers’ senior track standout has found the number four popping up quite a bit lately but it really all began at birth.
Being named William Dwayne Harrison IV led to him being called “Quay” which is French for fourth.
“It’s always been a thing. I’ve been called Quay ever since I was born basically,” said Harrison. “It’s become part of my name. They always announced William but everybody calls me Quay. It doesn’t matter.”
Harrison was able to advance to the Division 2 state meet on Saturday at Pickerington North High School when he finished fourth in the regional meet. He actually tied with teammate Trent Hacker and Meadowbrook’s Ethan Furbee for fourth place and got the state berth by winning a jump-off.
After putting together an outstanding performance in the district meet, Harrison was voted the Co-Player of the Year by the district coaches along with Brennan Perdue of Vincent Warren.
“It was pretty cool. I felt like I worked hard for it. I never expected it. There were kids winning four events,” said Harrison. “The Warren kid is an animal.”
Harrison won the high jump as well as the pole vault at 12-9 in the district.
Harrison was on the 4×400 relay team along with Ethan White, Santos Martinez and Trent Hacker that finished third in the district meet. He became the high point winner at the district meet thanks to the 1600-meter run in which he finished – wait for it – fourth.
Ironton coach Greg Cronacher had nothing but praise for Harrison.
“He’s just a great kid. As far as track and cross country, he works really hard and he’s very coachable. You can’t help but root for a kid like him,” said Cronacher.
Despite the many different techniques that he needs to learn and a hectic schedule at meets, Harrison said he wouldn’t have it any other way.
“I kind of liked it to be honest,” said Harrison. “I’ve always been the type of person who likes to fill up every second of his time. I don’t really like sitting around the house doing nothing. So, I was never waiting for the next event. I was jumping around from one event to another.”
Harrison said events like the pole vault, high jump and 1600 meters suited him better but he still enjoyed being part of the relay team that included Trent Hacker, Ethan White and Santos Martinez.
“I’ve always preferred open events because if I mess up I don’t feel like I let anybody down,” said Harrison. “If I do well, I feel pride in myself. But with the 4×4 I had such a great team this year. I love those guys. They’re really close with me.”
Of all the events, Harrison said pole vault is his favorite. Although he went 12-9 to win the district event, he only got 12-feet in the regional and missed qualifying for the state.
“Our bus broke down right before we got to the meet and we were about 30 minutes late,” said Harrison. “It was in my head and I was in a hurry and it was just horrible. I just didn’t jump well at all.”
It’s ironic that Harrison qualified for the state meet in the high jump considering he never did the event until this season. And the number four had a role in this part of his track career because he was only doing three events in the meet.
“This is my first year to high jump. They literally put me in the first relay meet when they add up the scores. Trent Hacker was our high jumper and he wanted someone else to help him out so I just said ‘OK, I’ll do it.’ I didn’t have a fourth event at that time and I was pretty good at it,” said Harrison.
“Halfway through the season I quit because I didn’t like it too much and then I started back up at the OVC meet.”
Harrison was living in a Louisville, Ky., suburb before moving to Ironton. It was in middle school where he played soccer.
“I liked it a lot. When I was in middle school, I played on the high school team because our middle school wasn’t very good and our high school didn’t have enough kids. I figured when I came here I was going to be a starter,” said Harrison.
“I came here thinking I’d be a big shot and Mrs. Lawless told me they didn’t have soccer. She suggested cross country and her sons ran it. I tried it and I sucked at first, but then I liked it a lot.”
Harrison finished second in the Ohio Valley Conference cross country meet just behind Charlie Putnam of Portsmouth. Putnam ran an 18.2 and Harrison a 19.0.
In the district cross country meet, Harrison was No. 20 with a 17:31.72 time and finished 42nd out of 168 runners in the regional meet with a 17:35.4 time to miss a chance at the state meet.
“I wish I could’ve had made it to the state meet. I was just a couple of spots off. It seems like it just happens every year,” he said.
Besides track and cross country, Harrison has wrestled throughout his high school career.
As a freshman, he suffered an injury that led to surgery and only allowed him to participate in five matches. This past season he was the 138-pound champion in the Ohio Valley Conference meet.
“I’m glad I finally made (the state) in track. I’m excited,” he said. “Obviously, I’ve never been there before. I’ve been trying to make (the state) in every sport. I’m kind of curious about what it’s going to be like.”
Harrison plans to continue his track and cross country career at Kentucky Christian University.
Let’s see. He’s going to college so that means four more years.
Just call him Quay.