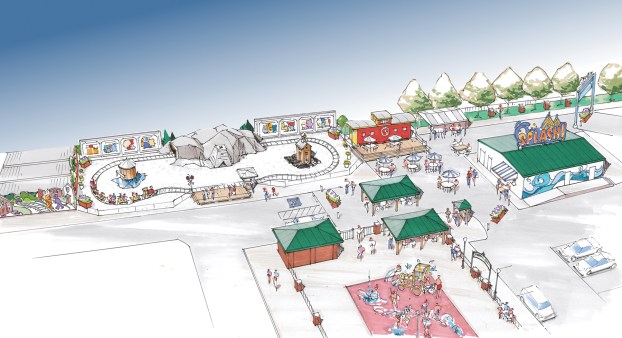 This illustration, from the Ironton-Lawrence County Community Action Organization, depicts planned developments for the area around the Ironton Splash Park, which will include new facilities, a children’s train and shelters. (Submitted photo)

With the return of the Ironton Splash Park and the end of COVID-19 restrictions, developments are under way in the adjacent area to create a destination for families.

Ralph Kline, assistant executive director of planning and development for the Ironton-Lawrence County CAO, said work is being done to upgrade the surrounding space.

“We’re trying to do more for the area to make it more kid-friendly,” he said.

He said one of the first changes was the restoration of the caboose next to the splash park, which was repainted and had a ramp built by students from Collins Career Technical Center.

Planned for this summer are upgrades and installations to facilities, including restrooms, shelters and picnic tables.

Opening next to the splash park in the former Ohio Department of Transportation location, will be the Shakery, a second location of the Shake Shoppe, owned by Maddie Cogan and Robby Brown.

Cogan said they hope to open in coming days and that the location will be open seven days a week, from 10 a.m.-8 p.m., Monday through Saturday and 1-8 p.m. on Sundays.

She said it will have a consolidated version of the menu of their main shop, located across the street from Ohio University Southern.

Kline said the changes are part of larger plan. He said Friends of Ironton are working to build a children’s train ride next to the park.

“These things, in general, are being done as a community project,” he said of the partnership.

He said they are working to invite local students, particularly in art classes, to help in the renovations.

“What we found is that, having the community involved, people take better care of things and have pride in them,” he said.

He said the goal is to make downtown more pedestrian friendly and to promote businesses and restaurants in the area.

“We want to bring people from neighboring communities, like Portsmouth and Ashland, to come up to the splash park and visit the neighboring stores,” he said.

He said this effort would not be limited to the summer season and said Friends of Ironton and Ironton aLive! Have been discussing the idea of creating a Christmas village downtown later in the year.

Kline said other improvements have been taking place downtown, such as the ongoing tree replacement project and work on the Brumberg Building, which had been slowed by the pandemic.

“That’s still moving along,” he said.

He said they are also happy to see private industry involved in work on buildings downtown, such as the former Tim’s News Novelties Shop in the Marlow Building on South Third Street.

Kline said the CAO has also submitted requests to the Ohio Department of Natural Resources to acquire funding for work on the Ironton riverfront, which would include upgrades on facilities and parking.

“We have a lot of different things going on,” he said. “There is a lot of activity.”

Commission to return to in-person meetings

The Lawrence County Commission met face to face on Tuesday for their weekly meeting, the first time since COVID-19 pandemic... read more