When outfielder William “Dummy” Hoy played for the Cincinnati Reds, he drew plenty of cheers from fans for his performances.
But no matter how loud the cheers, Hoy could never hear them.
He was deaf. 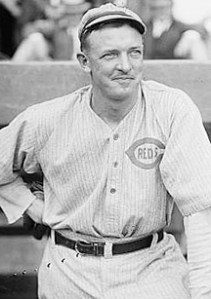 Hoy played for several Major League Baseball teams but enjoyed most of his success playing for the Reds and two Washington, D.C., franchises.
Because of his inability to hear, many sources said it was that situation that created signals for safe and out calls.
Born May 23, 1862, in Houcktown, Ohio, Hoy became deaf after suffering from meningitis at the age of 3.
He graduated from the Ohio School of the Deaf in Columbus as the class valedictorian.
He opened a shoe repair store in his hometown and played baseball on weekends where he earned a professional contract in 1886 with Oshkosh, Wisconsin.
Eventually, he became the third deaf player in the major leagues after pitchers Ed Dundon and Tom Lynch.
In May of his last season with the Reds, he batted against pitcher Dummy Taylor of the New York Giants in the first faceoff between deaf players in the Major Leagues. Hoy got two hits.
In his rookie season, Hoy led the league in stolen bases, finished second in walks with 69 and posted a .274 batting average.
Because of his small 5-foot-4 frame, the left-handed batter drew a lot of walks and drew walks due to his smaller strike zone. He led the league twice in on-base percentage.
Playing centerfield from 1889 to 1902, Hoy set records for career putouts (3,958) and total chances (4,625) as an outfielder. He retired among the leaders in outfield games (second 1,795), assists (seventh 273) and double plays (third 72).
An excellent baserunner, he scored more than 100 runs nine times. His 1,006 career walks put him second in MLB history behind Billy Hamilton andhe ranks eighth in career games played (1,796).
Hoy retired with a .288 batting average, 2048 hits, 1429 runs, 725 runs batted in, 248 doubles, 121 triples and 40 home runs.
He had 488 stolen bases from 1888 through 1897, and 108 more after the statistic was redefined to its present meaning in 1898. His 1795 games in the outfield ranked second to Jimmy Ryan (then at 1829) in MLB history. Jesse Burkett broke his MLB record for career putouts in 1905, and Clarke topped his record for career total chances in 1909. His record for career games in center field was broken by Tris Speaker in 1920.