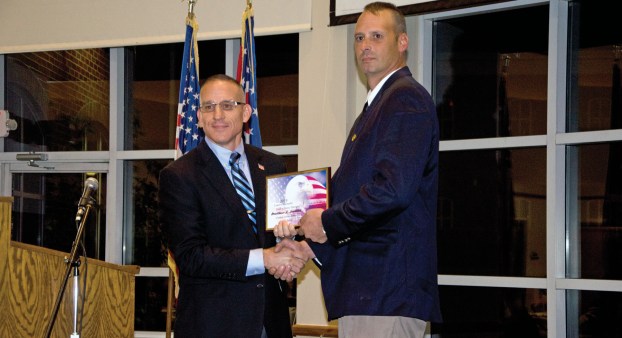 Retired Lt. Col. John Turner presents Matthew Jenkins with the first Lawrence County Veteran of the Year award at the induction ceremony at Ohio University Southern in 2019. Nominations are being taken for the 2021 Veteran of the Year. (The Ironton Tribune | Heath Harrison)

Nominations sought for veteran of the year

Nominations are being taken for the 2021 Lawrence County Veteran of the Year.

Those who would like to nominate a veteran may do so by the deadline of Aug. 27, Lou Pyles, who serves on the five-member Lawrence County Veteran of the Year Committee, said.

The Lawrence County Hall of Fame is a Veterans hall of fame that focuses on accomplishments and achievements before, during and after military service. The Lawrence County Veterans Hall of Fame recognizes the valor and/or excellence while the Veteran was in the military as well as post-military achievements of outstanding Veterans and spotlights all Veterans’ contributions to the civilian workplace or their community.

The veteran nominee must meet the following criteria:
• Must be a past or current Lawrence County, Ohio resident
• Must have received an “Honorable” discharge for all periods of service
• Must be of good moral character

Copies of the nomination form can also be emailed, faxed or mailed from Tim Carpenter of the Lawrence County Department of Veterans Service by contacting them through Facebook, calling 740-533-4328 or emailing tcarpenter@lawrenceoh.com.

A 2020 veteran was also selected and that honoree will be named, along with the 2021 Veteran of the year, at a ceremony this fall, Pyles said.

South Shore to have party to improve park

SOUTH SHORE, Ky. — A civic club in South Shore, Kentucky, has a long-term plan for building up the city’s... read more