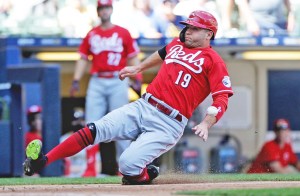 Cincinnati Reds’ Joey Votto slides safely as he beats the baseball (by his hand) into home plate as he scores what proved to be the winning run in a 2-1 win over the Milwaukee Braves on Wednesday. (John Fisher/Getty Images/Courtesy of the Cincinnati Reds)

MILWAUKEE (AP) — Tyler Mahle tied his career high with 12 strikeouts, Tucker Barnhart drove in the go-ahead run with a double in the seventh inning, and the Cincinnati Reds beat the Milwaukee Brewers 2-1 on Wednesday to finish a three-game sweep.
Cincinnati has won six straight and 11 of 13. The Brewers dropped three straight for the first time in nearly a month and were swept for the third time this season. Milwaukee totaled nine hits and four runs in the series against the Reds.
“They pitched well,” Brewers manager Craig Counsell said. “Tyler Mahle is having a really good year and I thought he pitched really well today. His fastball was really good, really well-located, consistently threw it up and never made mistakes down in the zone.”
Mahle (7-2) allowed three hits and a pair of walks over six innings as he surpassed the 10-strikeout mark for the first time this season and fifth of his career. Brad Brach, Sean Doolittle and Lucas Sims completed the five-hitter, with Sims getting the last four outs for his seventh save.
“It’s been the whole team,” Mahle said. “The starters have been doing great, the bullpen has been doing great and the offense has been doing a great job all season.”
The Brewers scored their lone run in the third when Chirstian Yelich drove in Daniel Vogelbach with a single to right.
Milwaukee’s Freddy Peralta (6-2) struck out six over six innings without walking a batter. He gave up five hits, the first a two-out single by Nick Castellanos in the fourth. Tyler Naquin followed with a double to left, scoring Castellanos.
Peralta retired his first two batters in the seventh before Joey Votto reached on a single. Votto scored the go-ahead run on Barnhart’s 14th double of the season.
“It was fun,” Barnhart said “What a fun game to be a part of. I’m proud of everybody, all series long.”
The Reds were hardly overwhelming at the plate. After winning 2-1 on Tuesday night with just two hits, they totaled six hits on Wednesday.
HE CALLED IT
Barnhart told Votto before the start of the seventh to be ready to score if he was on base when Barnhart came up.
“The second I got to first base, I knew I had to be ready to score because my man called it,” Votto said. “That was a big hit in a big spot and I had to score.”
The veteran first baseman emphatically pumped his fist before making his way back to the dugout, where his teammates were just as fired up after seeing him score from first.
“Joey is the heartbeat of this team,” Barnhart said. “Seeing him fired up like that is awesome.”
BREWERS ADD AN ARM
Milwaukee claimed right-handed reliever Ryan Weber off waivers from the Red Sox on Wednesday and optioned him to Triple-A Nashville.
Weber, 30, allowed 11 runs including four homers in his lone appearance this season for the Red Sox and had a 4.63 ERA in seven appearances (six starts) for Triple-A Worcester. He was designated for assignment two days ago when Boston acquired Yacksel Rios in a trade with Seattle.
To make room for Weber on the 40-man roster, Milwaukee outrighted RHP Chad Sobotka to Triple-A Nashville.
TRAINER’S ROOM
Reds: INF Mike Moustakas was expected to return from the injured list during the team’s trip to San Diego this weekend but instead returned to Cincinnati after experiencing soreness in his foot during a rehab appearance with Triple-A Louisville Tuesday night.
Brewers: LHP Angel Perdomo is scheduled to join Triple-A Nashville to begin a rehab assignment this weekend. Perdomo has been out since straining his lower back on May 30.
UP NEXT
The Reds travel to San Diego for a four-game series against the Padres, with Wade Miley (6-4, 2.92 ERA) starting Thursday night’s opener against Joe Musgrove (4-6, 2.50).
Milwaukee’s Brandon Woodruff (5-2, 1.52) starts the opener of a four-game series at Colorado. German Marquez (4-6, 4.60) takes the mound for the Rockies on Thursday night.

MILWAUKEE (AP) — The Cincinnati Reds broke open a scoreless game in the 10th inning without the benefit of a... read more